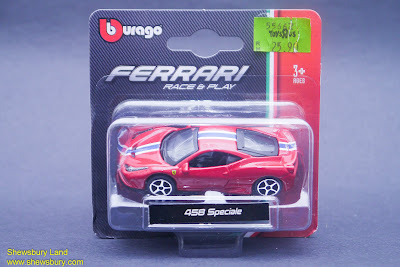 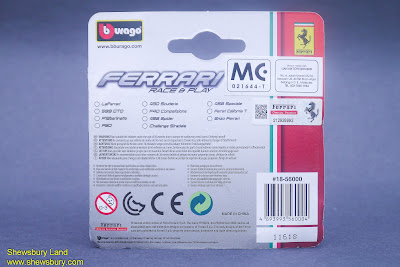 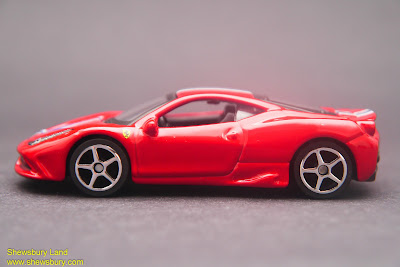 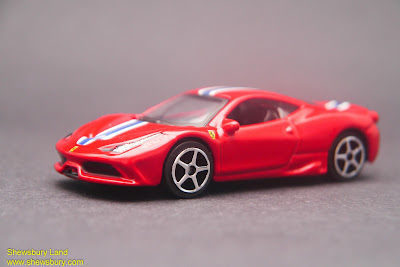 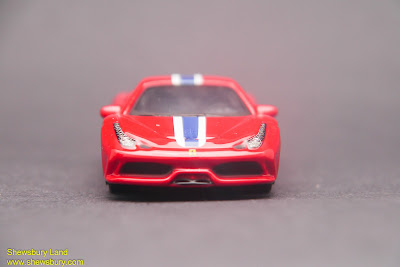 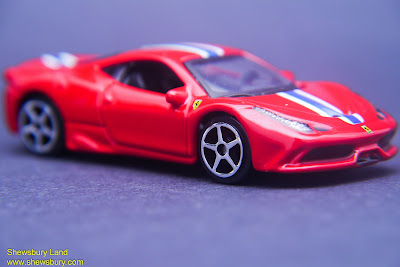 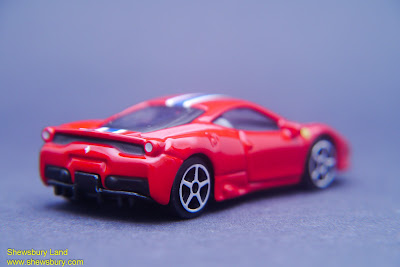 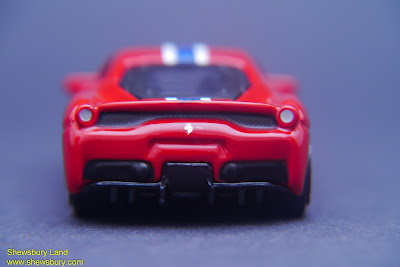 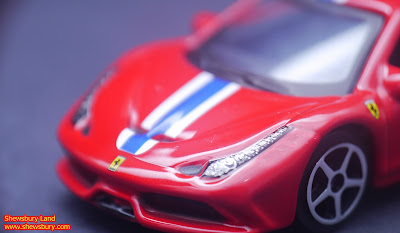 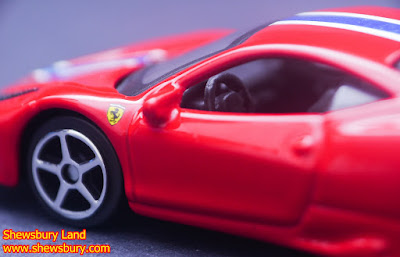 The casting quality is very good while the painting, detailing and finishing quality are equally positive, nothing to complain really, so far so good.

The did a decent job in giving minor detailing on the engine, given the scale, this is not bad: 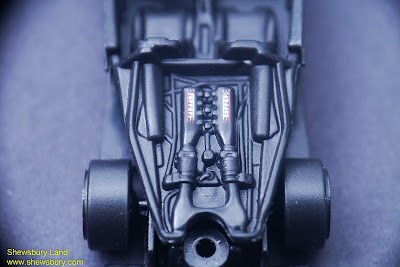 As for the interior detailing, not much to shout about, all are expected for such scale: 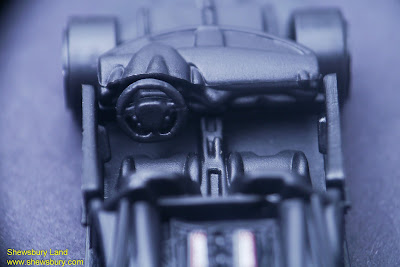 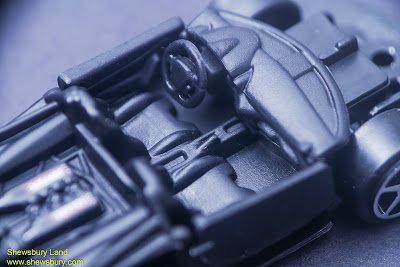 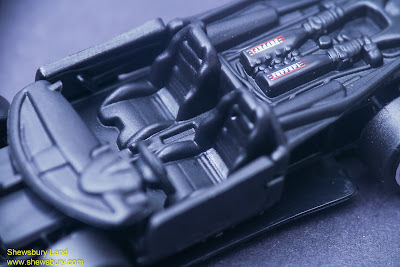 We've reviewed quite a number of Ferrari 458 from various brands in which if you interested you can see from the link below:

So there is not much more I have to say here, I really love the 458 model, most of them that I had are from the same model but this "458 Speciale" is the top performing 458 Italia. It was unveiled in 2013 at the Frankfurt Motor Show. Distinctions of the Speciale (on the real car that is) are the forged wheels, vented bonnet, finned side sills, taller rear spoiler and redesigned bumpers, which include active aerodynamics designed by Ferrari Styling Centre in cooperation with Pininfarina; front and rear movable flaps balance downforce and cut drag at speed. The engine was revised, with power increased to 445 kW (597 hp) at 9,000 rpm, 540 N·m (398 lb·ft) of torque at 6,000 rpm. Electronic systems were updated too, introducing side slip angle control (SSC) to improve car control on the limit. SSC performs instant-to-instant analysis of the car’s side slip, comparing it with the target value and then optimising both torque management (via integration with F1-Trac traction control) and torque distribution between the two wheels (via integration with the E-Diff electronic differential). The weight/power ratio (1,290 kg dry, 1,395 kg at the kerb, 90 less than the standard 458) is equal to 2.13 kg/cv, sprints from 0 to 62 mph (100 km/h) in just three seconds (0–125 mph or 0–200 km/h in 9.1 seconds with a response time of just 0.060 seconds). Ferrari declared a Fiorano test track lap time of 1:23.5, only 0.5 seconds slower than the F12berlinetta. Lateral acceleration now reaches 1.33 g. 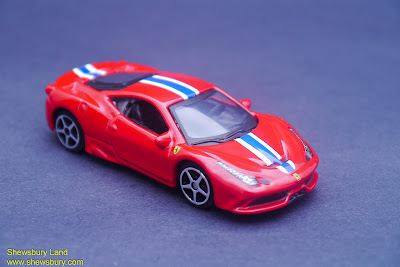 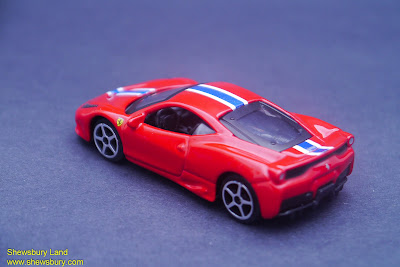 Overall, this is a very nice representation of 458 Speciale at 1/64 scale and I have to say that in short, Bburago have done a tremendous job, no complain from me!!! I love it!!!

The Speciale with the La Ferrari, both from Bburago at the same scale: 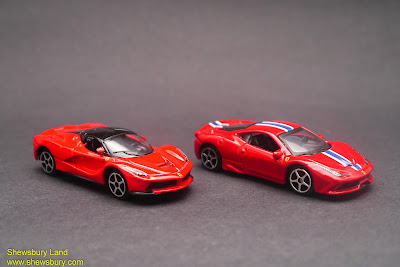 The Speciale with the rest of our Ferrari 458 Italia: 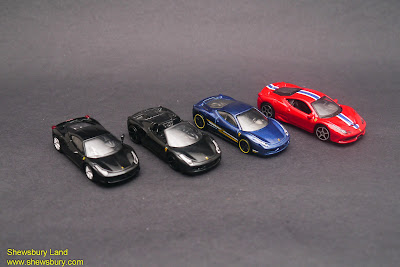 With the rest of the Ferrari that we have in our collection, we don't have much really: 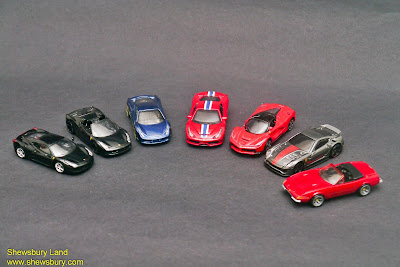 And a little bit of fun with some photography trick: 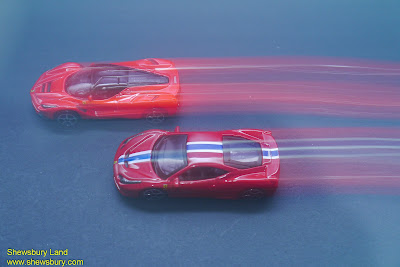 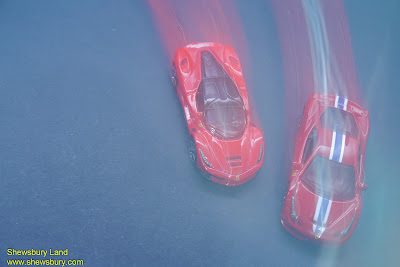 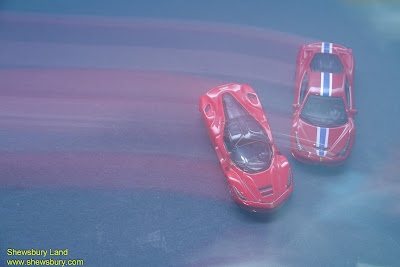 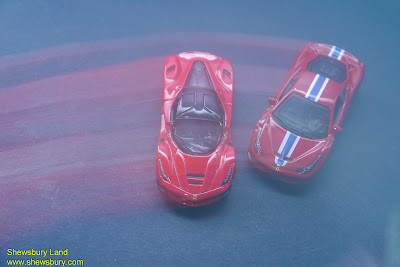 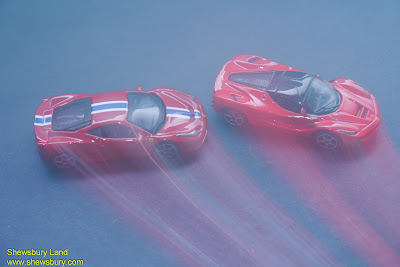