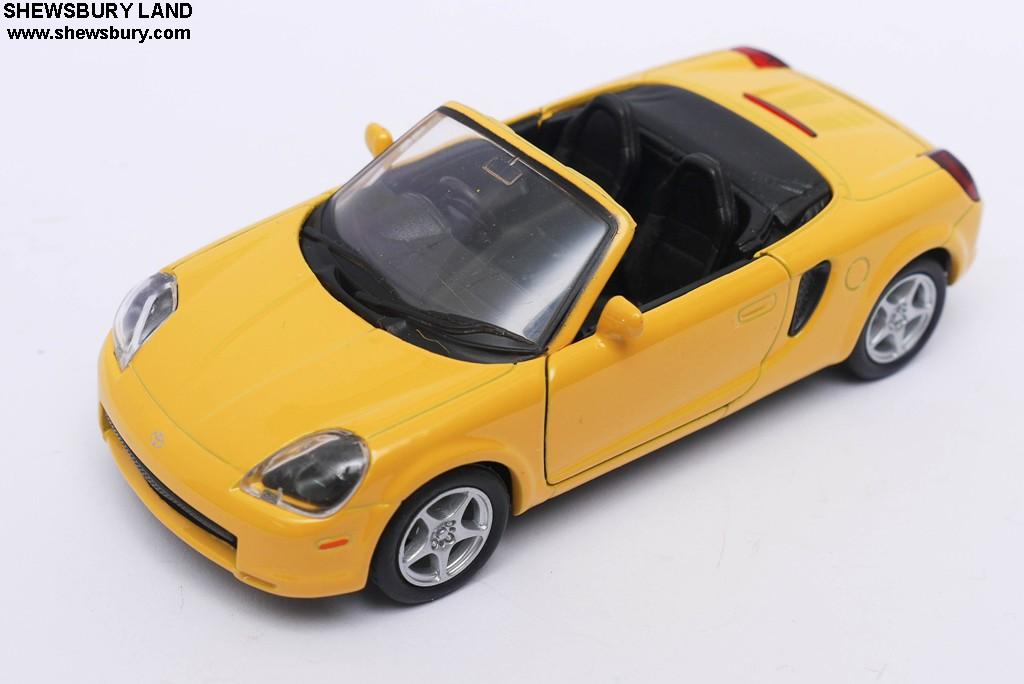 I never bought any products or specifically die cast car models from Welly before and suddenly I saw this Toyota MR2 Spyder die cast car model at around 1/30's scale produced by Welly - I pick it up and have a look - left hand steering wheel (British/Japanese Style) and without further delay I just grab this lovely Spyder. Frankly speaking, I've been looking for this particular car model for quite sometime now, though I'm actually more interested with the miniature 1/64 scale but I guess this 1/30's scale wont hurt since the detailing is quite decent. 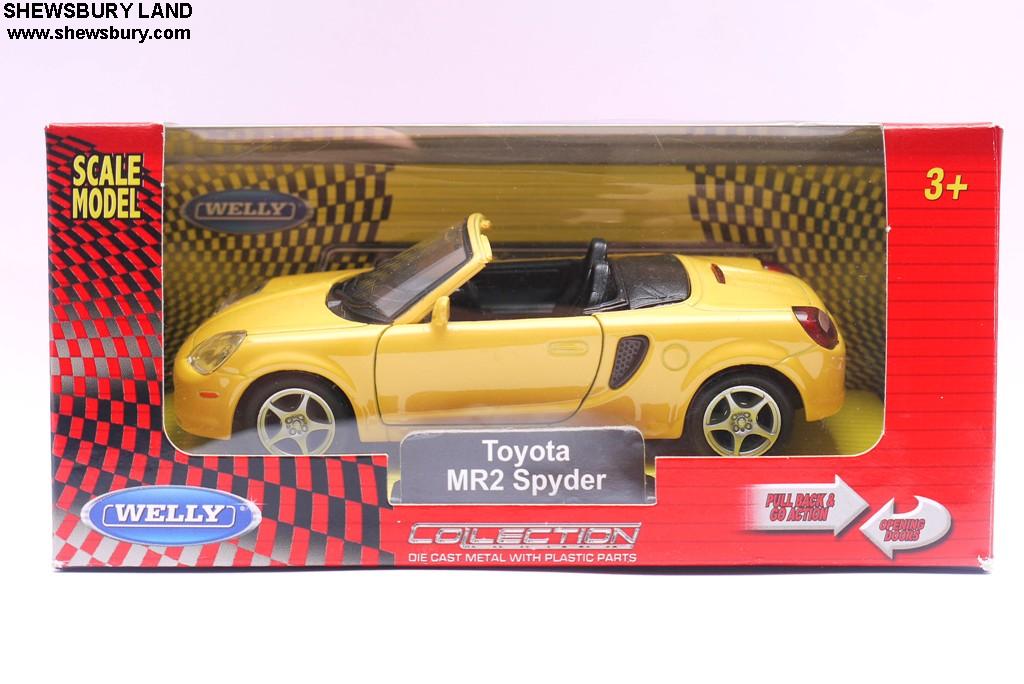 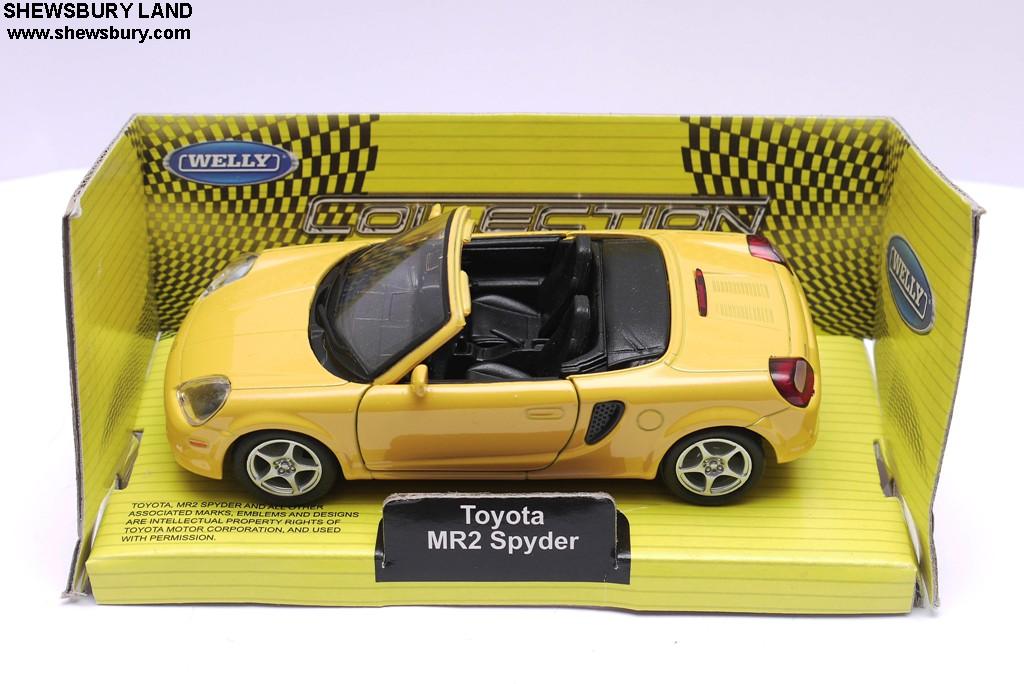 Now let's have a look at this car - out of the box; 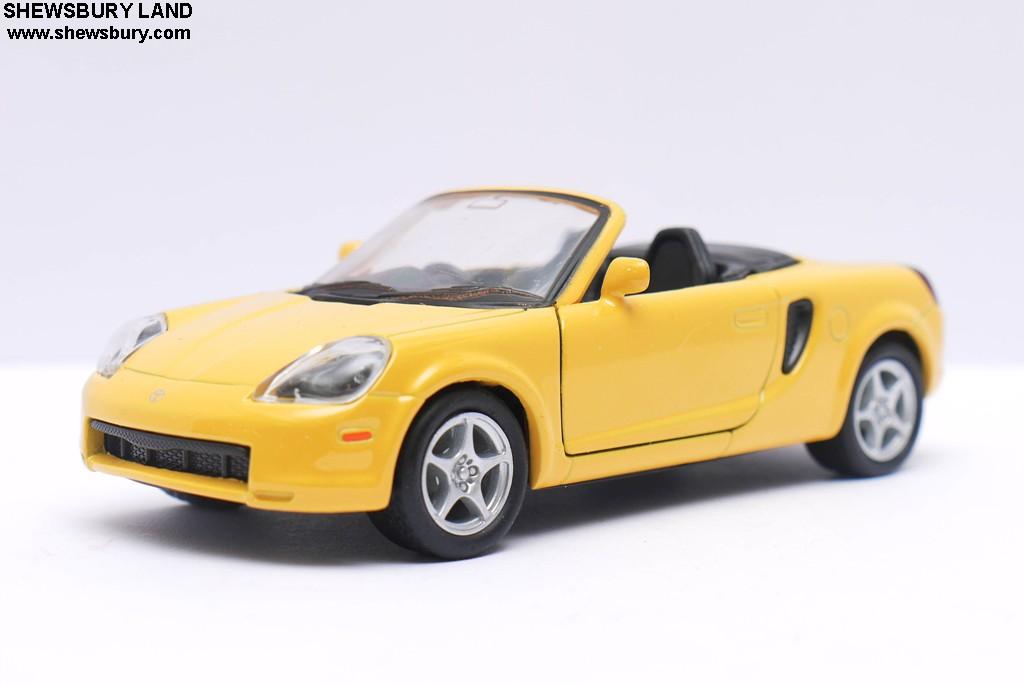 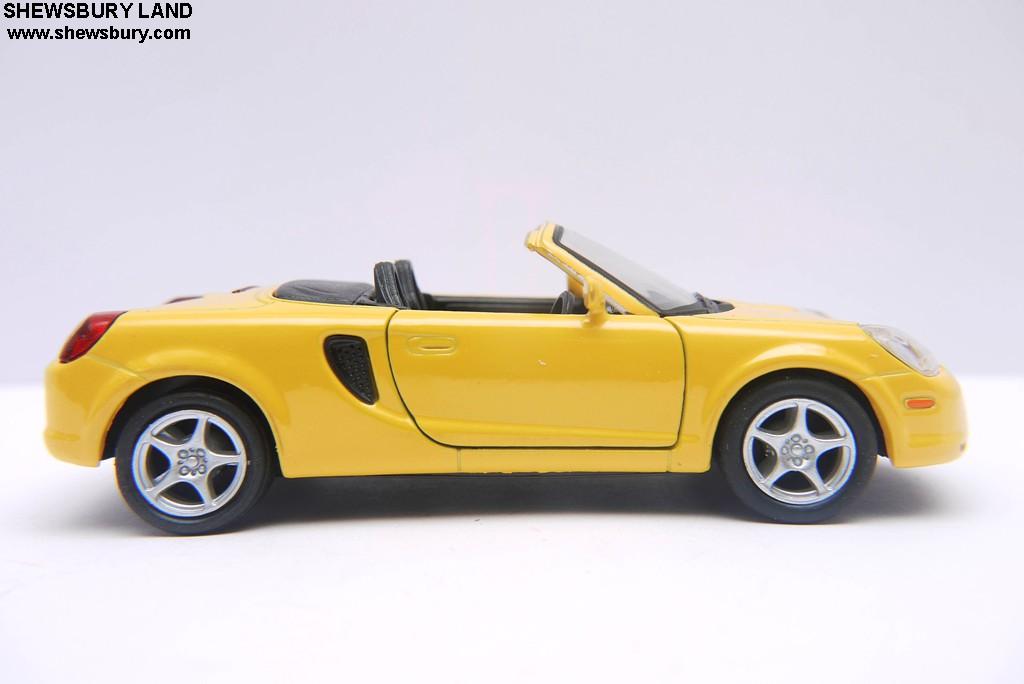 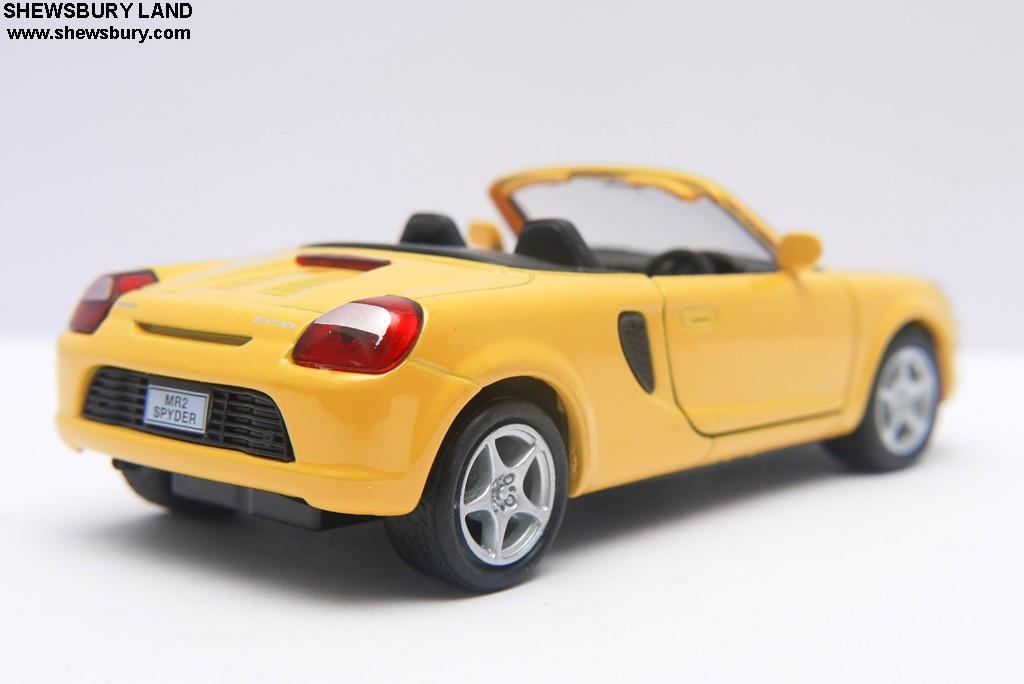 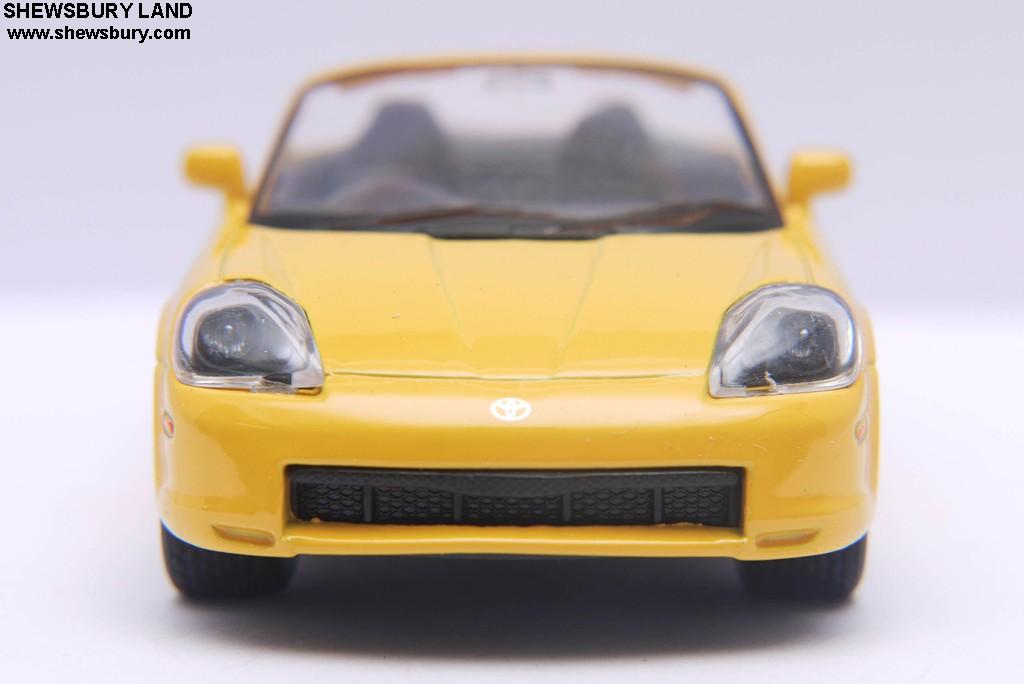 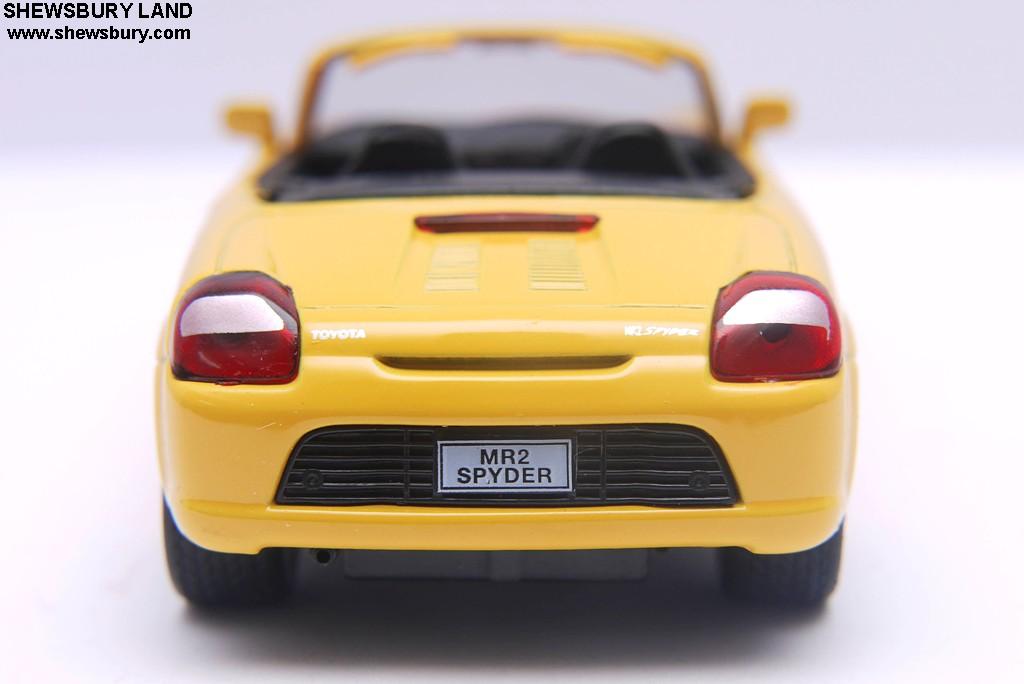 The Toyota MR2 is a two-seat, mid-engined, rear-wheel-drive sports car produced by Toyota, from 1984 until July 2007 when production stopped in Japan. There are three different generations of the MR2: 1984–1989, with angular, origami-like lines, 1990–1999, which had styling that some compared to Ferrari sports cars, and 2000–2007, which somewhat resembled the Porsche Boxster. It was designed to be small, with an economical powerplant, but sporty in style and handling. Basic design elements, such as MacPherson strut front and rear suspensions and transverse-mounted inline-four engines, are common to all three generations of MR2, though each generation differs greatly from the next in particulars.

The third generation MR2 had three different names, depending on country; Toyota MR-S in Japan, Toyota MR2 Spyder in the US, and the Toyota MR2 Roadster in Europe. With the previous MR2 having been in the market for almost ten years, the newest MR2 took a drastically different approach than the outgoing model. The new MR2 was a part of Toyota Project Genesis, a plan to attract buyers from the younger age bracket in an effort to increase sales in the US. The most obvious change was the switch from a hardtop/open-roof option to a true convertible soft top, giving the car the 'Spyder' designation.

Many claim that this car was inspired by Porsche Boxster which was released in 1996, due to its similar appearance. However, the first prototype of MR-S appeared in 1997 at the Tokyo Motor Show, which had slightly more angled and rigid appearance than the current production model, which included additional curves for a more aerodynamic and appealing look. The MR2 Spyder chief engineer Harunori Shiratori said, "First, we wanted true driver enjoyment, blending good movement, low inertia and light weight. Then, a long wheelbase to achieve high stability and fresh new styling; a mid-engine design to create excellent handling and steering without the weight of the engine up front; a body structure as simple as possible to allow for easy customizing, and low cost to the consumer."

The ZZW30 is considered to be the best-handling MR2 in both overall limit and controlability.


Back to this die cast car model, the exterior detailing is quite pleasing. Plastic parts is used for the front lights and you can see the Toyota logo accordingly on the front of the car; 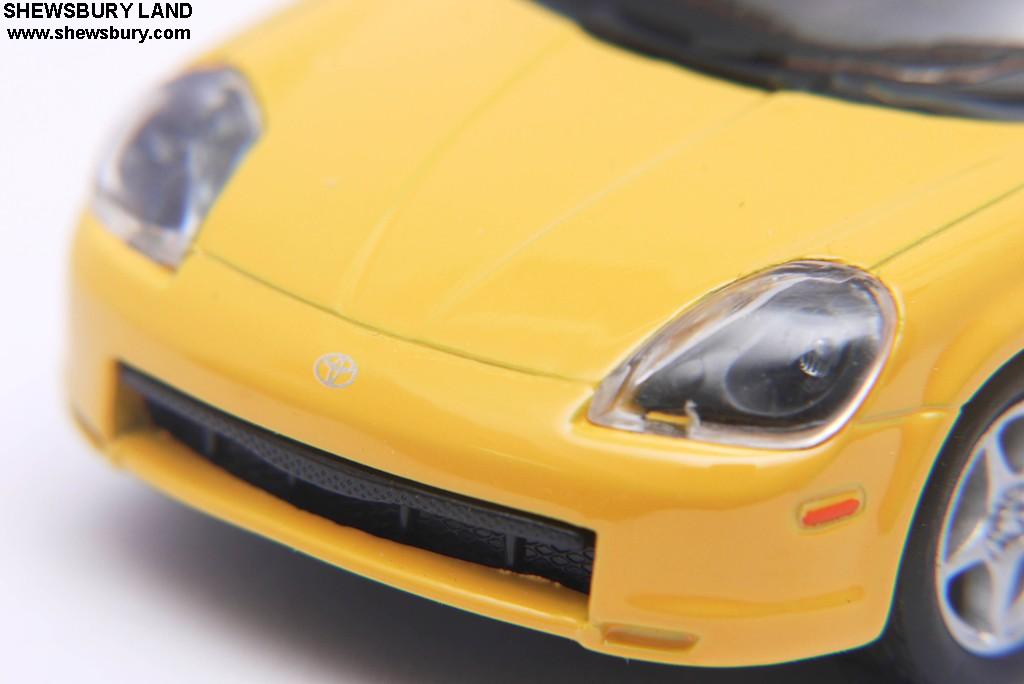 And the same can be expected on the rear part, the detailing and marking is very nice indeed. 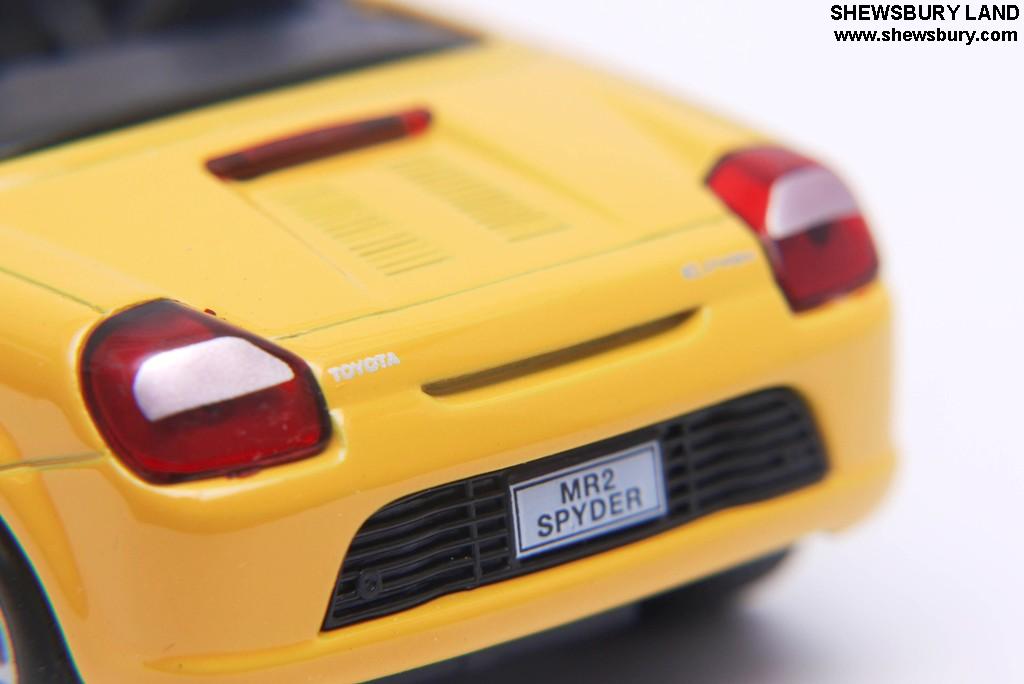 The wheels design is not bad either; 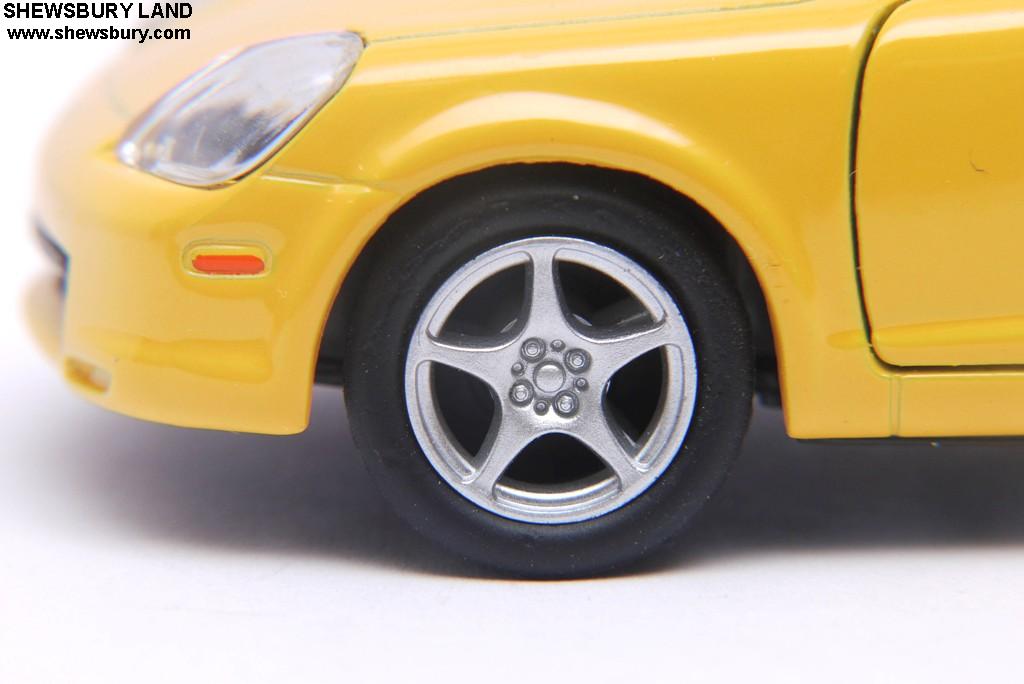 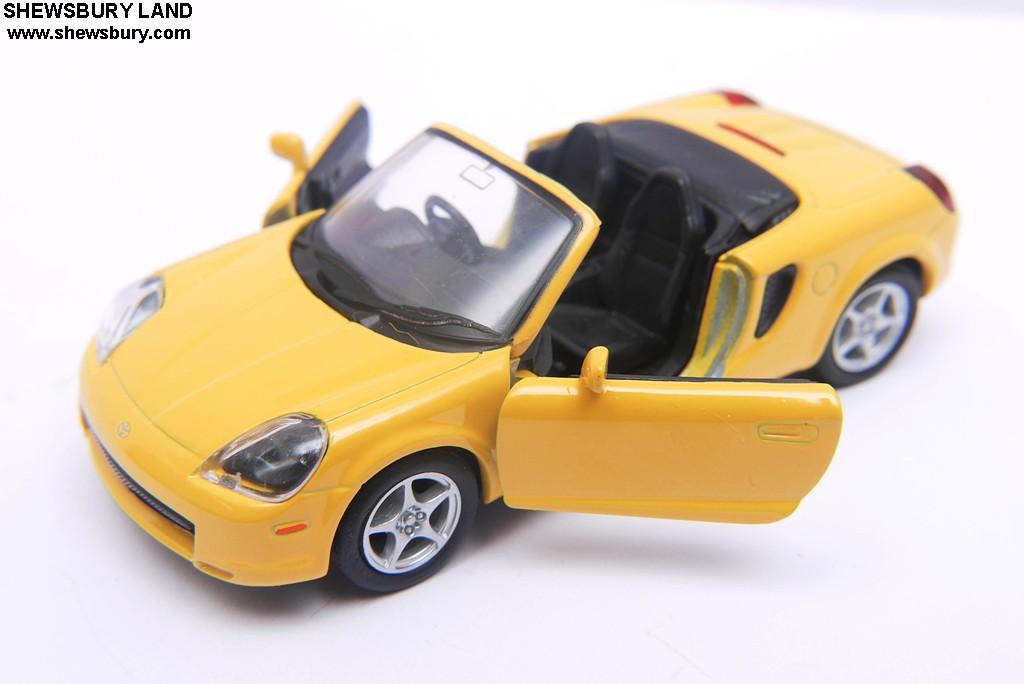 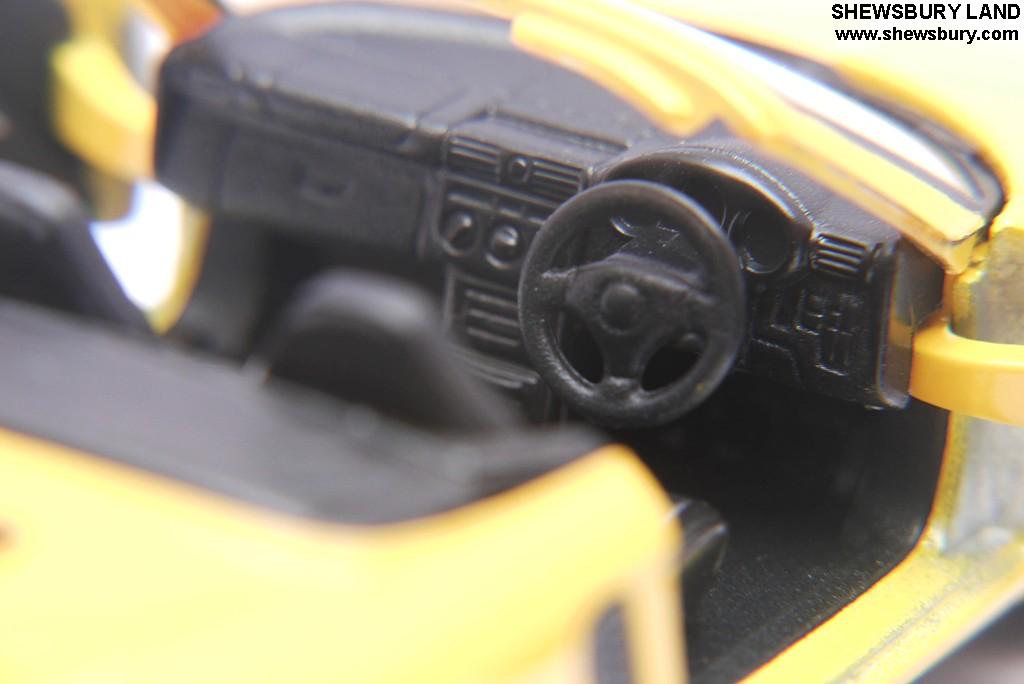 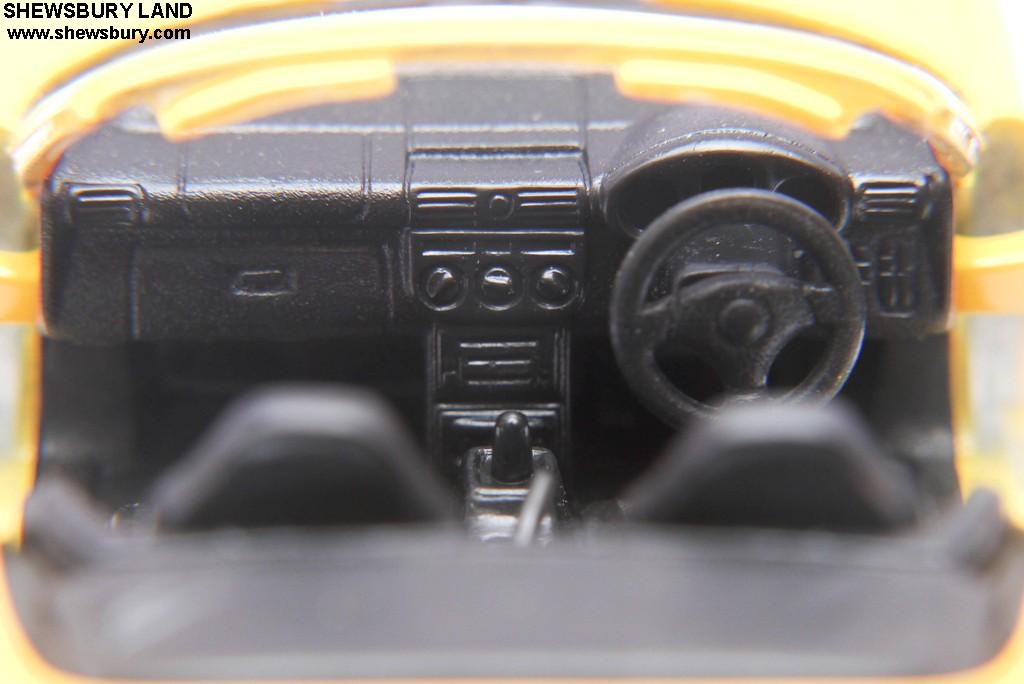 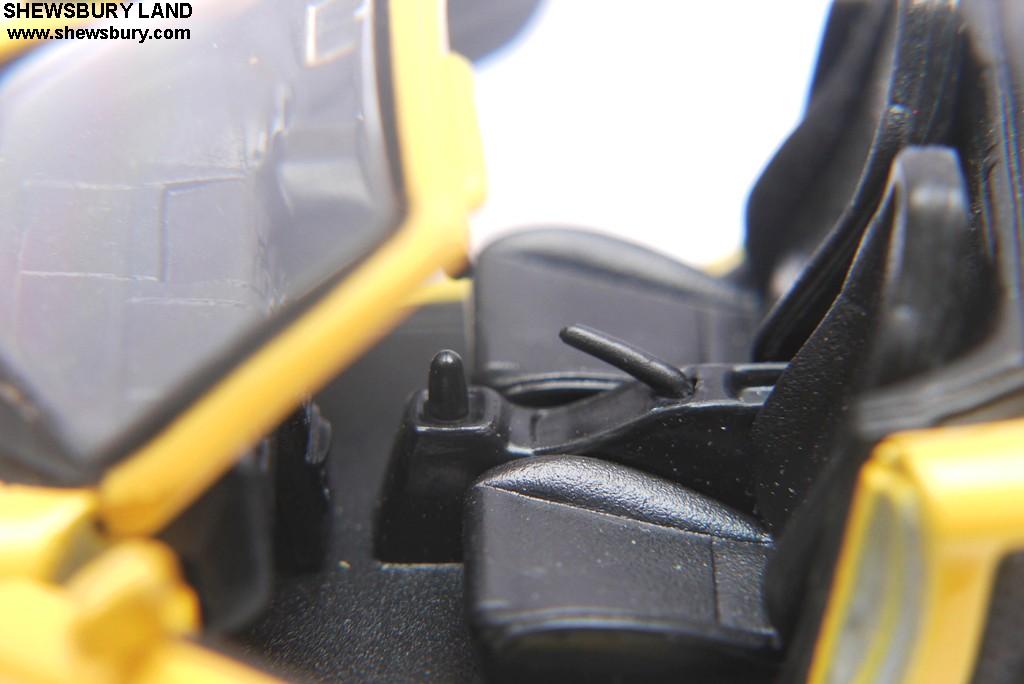 Side by side with Toyota Celica at around almost the same scale 1/30's: 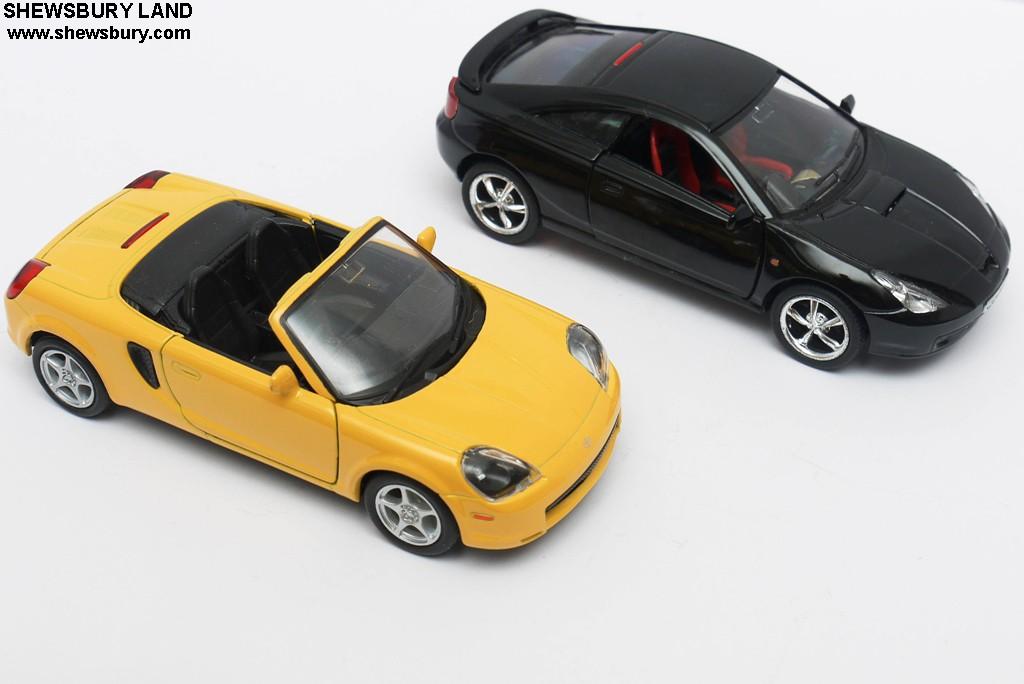 Side by side with Toyota Sprinter Trueno (AE86) also at around almost the same scale 1/30's: 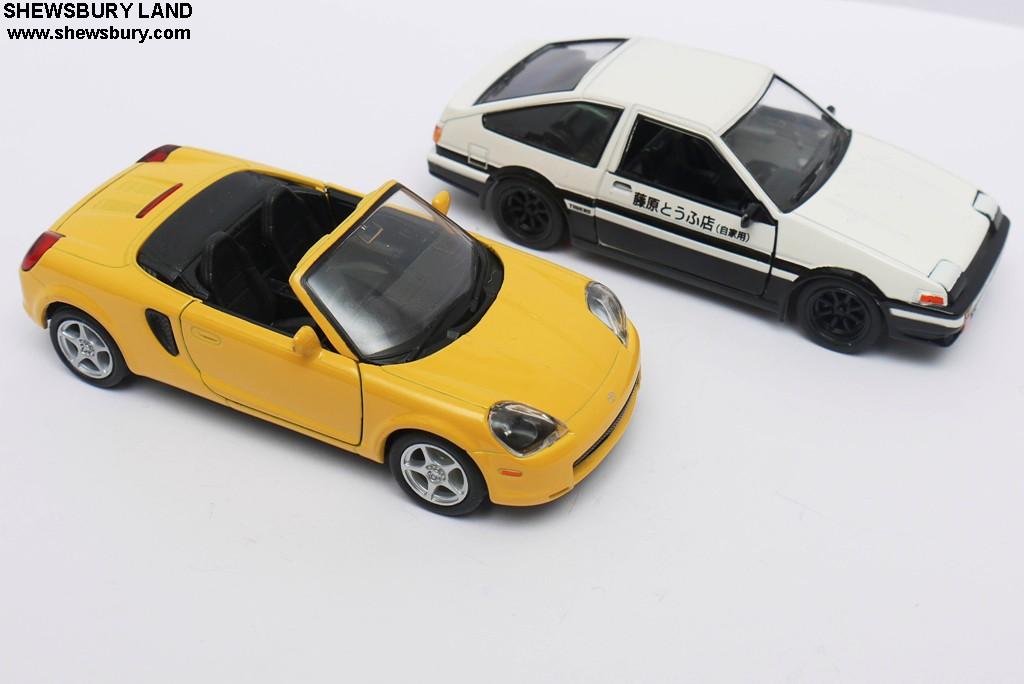 Overall, I think this is a very good die cast car model of Toyota MR2 Spyder produced by Welly. The painting job is good, exterior and interior detailing and marking are equally pleasing and this can easily become a nice display item on your car shelf. No complain for me, all is good, at SGD 12.00 (about USD 9.70 / EUR 7.40 / 908 Yen) this car model worth the money. 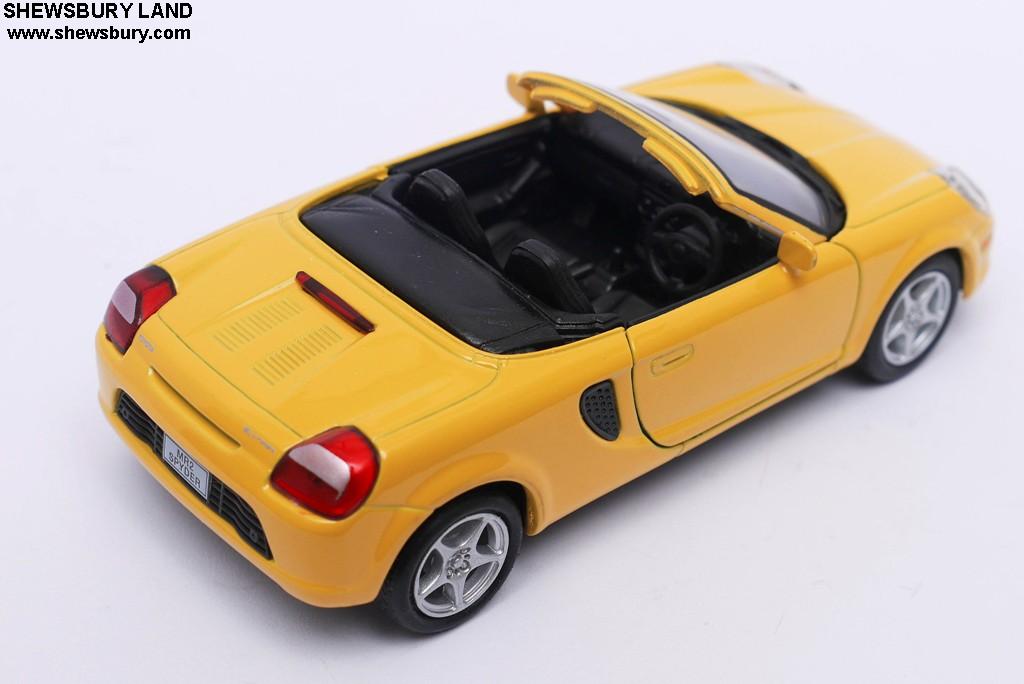