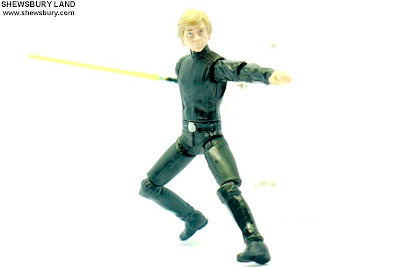 I have quite a number of Star Wars 3.75' action figures which goes way back from several years ago and I also have some from the new re-issued modern version.

Off all the action figures/toys that we have in Shewsbury Land, almost all of the Star Wars action figures remained un-open, still inside their respective packaging and mostly are in mint condition and it's been like that for many years now.

However, this year, I decided to take them all out of the packaging, do the review, play with them and make some digirama with them, having fun all the way coz I can see that after August 2012, Shewsbury Land may or may not continue it's operation or maybe we will move on to something else. It's still early to tell now, but possibilities are there, we just need to wait and see.


Nonetheless, this is now the review of "Star Wars Return Of The Jedi - Luke Skywalker (Star Wars The Vintage Collection VC23) produced by Hasbro.

As a side note, I don't have the older version Luke Skywalker action figure produced by Kenner or Hasbro from many years ago and thus this is my first ever Luke Skywalker.

I think it's kind great that I got this new version coz they have awesome improvement especially on articulation wise. 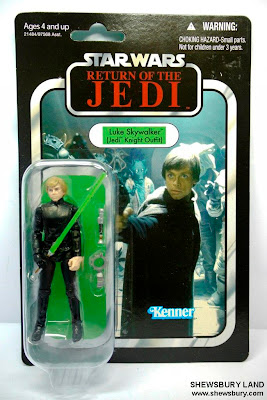 This re-issued version use the same packaging-art like the old one from Kenner, so you can basically can still see the picture of the old figure; 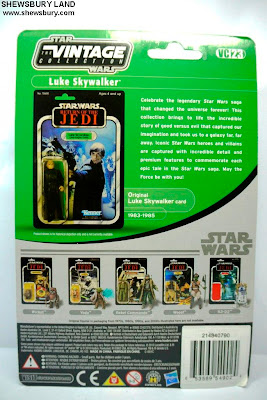 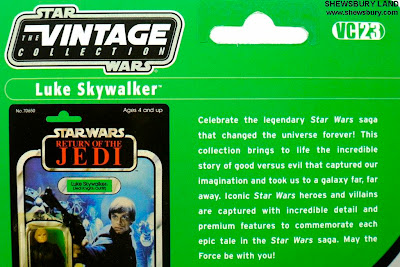 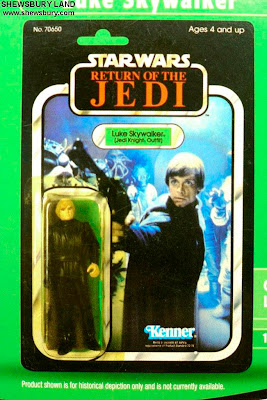 One thing that I think is quite difficult when it comes to this mass-market produced action figures from Hasbro and especially (though not limited to) from Star Wars series is that it's pretty difficult to "save the packaging" if you want to take them out. That is the very reason why many serious Star Wars collectors did not open their collections and just leave it inside the packaging just like that....

Nothing wrong with that, one have the right to keep their collections the way they want it to be. I my self have been preserving several of them in that situation for many years now but suddenly in 2011 I changed my mind....

I personally think it would be nice if they can use some sort of box system, like those Figma or Revoltech or what ever action figures produced by Japanese toy makers and/or hobby company.

With this, we have better chances of preserving everything accordingly....

But then again, this is the way it has been and I think it would be hard to change the old tradition.

Furthermore, I also think that maybe cost factor is another issue involved. Probably if they provide a nice box, they are more likely to increase the price since they will say that will required extra efforts and costs....


You will get the figure, 1 light saber in ON and OFF mode and you will also get some sort of hand cuff maybe from those bondage sex genre in adult video. 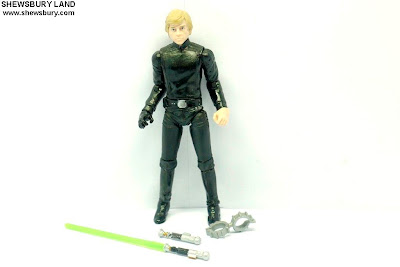 Let's look at this figure; 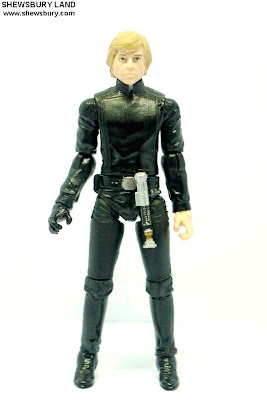 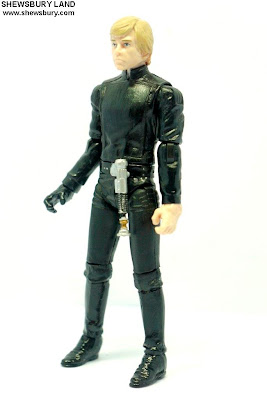 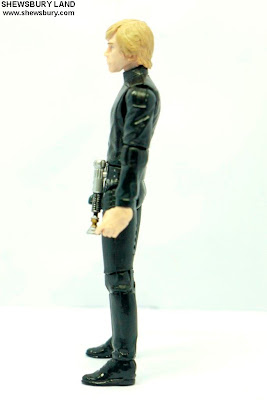 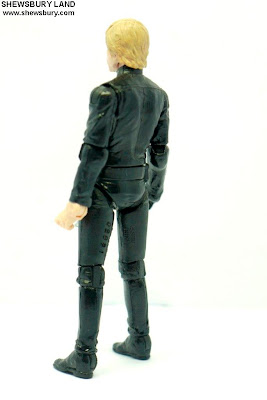 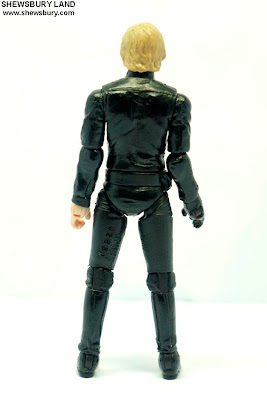 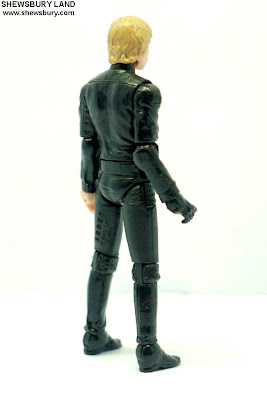 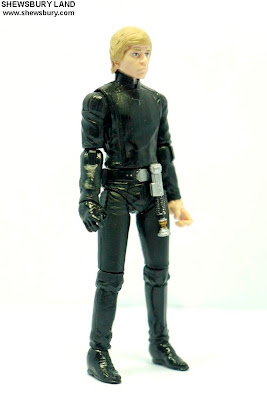 For a cheap SGD 20.00 mass produced action figure, the sculpt of the face is quite impressive.

Articulation is the main highlight for the newly re-issued figures from Hasbro. Those days, many years ago, this kneeling pose is impossible, but now you can do it easily.

Hasbro did a great job with the joint system and they are all quite decently hidden....

Some photos about the great articulation of this figure; 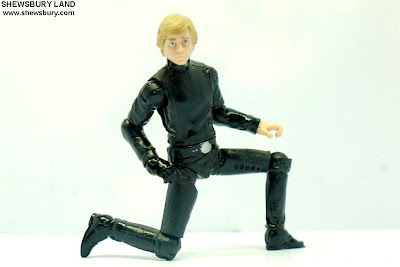 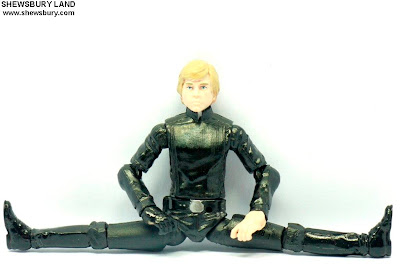 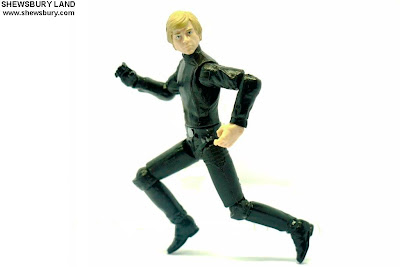 Not much more to highlight, it's time for action pose with the light saber.... 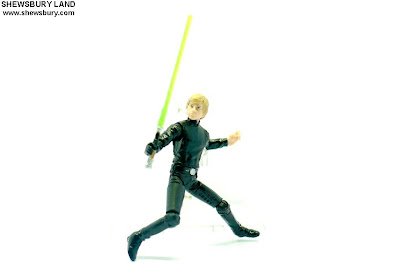 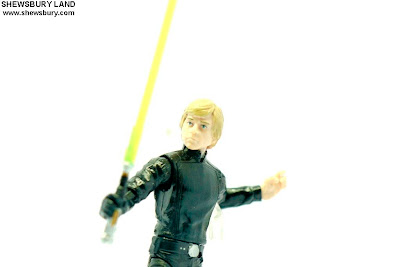 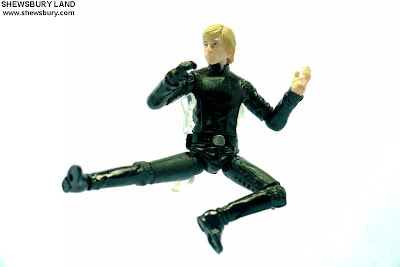 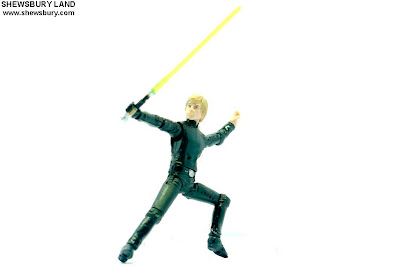 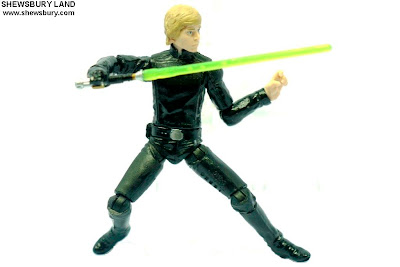 If you have Darth Vader, you can then do the father vs son final battle - clash of titans... 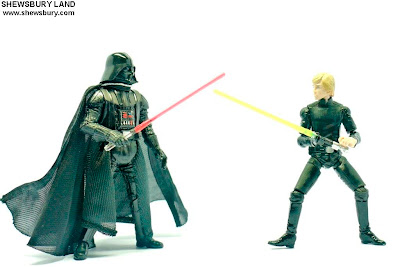 Overall, this is a great action figure produced by Hasbro. Nice sculpt and articulation, comes with a nice weapon and additional accessories, what more could you ask for a SGD 20.00 item? Probably there are other manufacturer out there who could provide a bigger and more detailed figures but surely they come with higher price tags and perhaps are specifically targeted at serious collectors while this 3.75" action figures are widely available from many of the local toy shop or the toy sections of big departmental stores near you and they are suitable for both kids and seasonal adult collectors.


Well done Hasbro... perhaps, the only wishlist I would have now is if in the future they can instead provide a box rather than this typical old fashion packaging style.

I personally believe that when George Lucas created the whole Star Wars saga, he purposely use the name "Luke" as some sort of a mirror to his family name "Lucas" and that this character eventually become one of the main hero of the story. Maybe there is other reason as well or maybe he just happen to like that name "Luke".

During the filming of Star Wars, Lucas waived his up-front fee as director and negotiated to own the licensing rights (for novelizations, T-shirts, toys, etc.) - rights which the studio thought were nearly worthless (at least at that point of time). This decision earned him hundreds of millions of dollars[citation needed], as he was able to directly profit from all the licensed games, toys, and collectibles created for the franchise. This accumulated capital enabled him to finance the sequel himself.

The whole Star Wars saga is one of the greatest movie franchise of all time, certainly a classic. It is the first movie of its kind that use lot's of interesting special effects especially during those old days in the late 70's and early 80's where computer price is like a big bungalow house nowadays.

I personally believed that when George Lucas created the story, he think of it with a vision of a "boy" rather than as "adult man". Remember the Star Wars crawl saying = "A long time ago, in a galaxy far far away...." - this is in fact a very familiar line from those fairy tales story that we heard or read while we are still in kindergarten or in school while we are 7 or 8 years old.


When today I searched the name "Luke" in Google - the first result that came out is "Luke Skywalker" - amazing....

And just like Gundam, Star Wars have become a wonderful phenomenon around the world even till today and in this era of internet there are plentiful of websites and blogs that offers comprehensive information, theory, legacy, guidance and what ever about Star Wars.

Will there be any movie that can achieved the same success of Star Wars? I'm not sure, maybe yes maybe no, but we certainly don't mind to see something new came up in the future and hopefully it can be interesting as well.

In the modern era, we can think about those "Terminator movies" and "Pirates of the Caribbean movies" and even those "Harry Potter movies" as the successful long saga but I personally don't feel that they can shake the world the way George Lucas did with his "Star Wars saga".....

I hope that someday George Lucas will at least produced 1 more story/movie before he can permanently retired - something new, not related to Star Wars or any of his previous work but something that can be as magnificent as well... then again, it could be just a wishful thinking of mine....