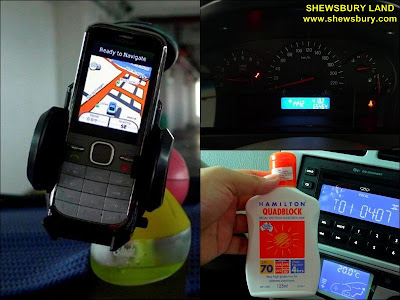 GPS navigation system is ready, sun block available, petrol is full, CD player is working - listening to Korean pop songs (lot's of BoA and 2NE1), air condition is perfect and we ready to go to Tutong...

Went to Tutong district recently for some tour and to try some popular local foods there.

Tutong is 1 of the 4 districts in Brunei. The "capital" or some sort of is the "Pekan Tutong" ("Tutong Town" in English). At the north side of Tutong is the South China Sea, at the east is "Brunei and Muara District", at the west is Belait District.


Below: That's basically how Tutong Town looks like, image is from Google Maps.

Distance from Brunei's capital (Bandar Seri Begawan) is about half an hour drive. I guess it's something like around or within 30km like that. I limited my driving speed at 140 km/h though sometimes I touched 150 km/h and basically it takes me for only about 20 minutes. Maybe if I have a more powerful sports car like one of those Subaru or Nissan Sylvia or maybe Honda S2000, probably it can be a little faster.


I arrived at the beach area at around 3.13pm and wait for our local host, the popular cosplayer - "QQ The Priest" as she would like to be known online. 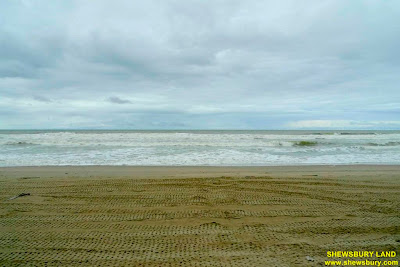 While waiting for her, I managed to captured some scenery; 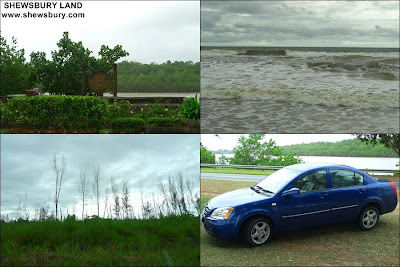 It's been a long time since I brought both the Kagami twins for an outings so this time around I decided to bring them both out... 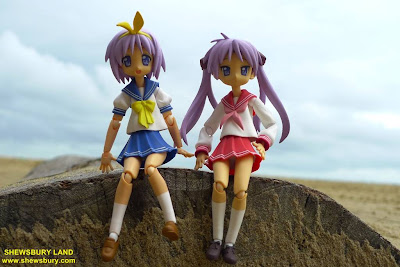 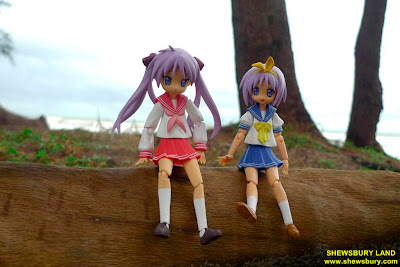 The popular landmark in Tutong Beach. 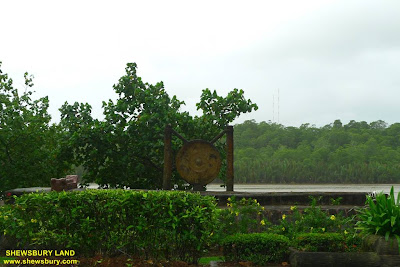 I then become passenger in her car. Since the weather is cloudy and rain is just around the corner, QQ use her reliable Honda Accord, one of those late 90's model. Their family have lot's of cars, maybe around 7 or maybe 8 (or more)... 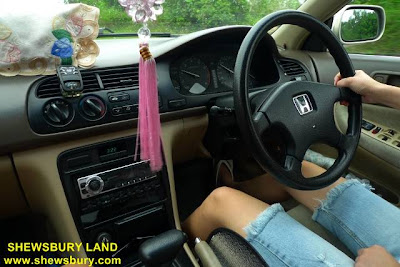 While driving QQ told me lot's of story about this small town, some of them includes about some sort of ghost story related to a big house not so far from Tutong Town... 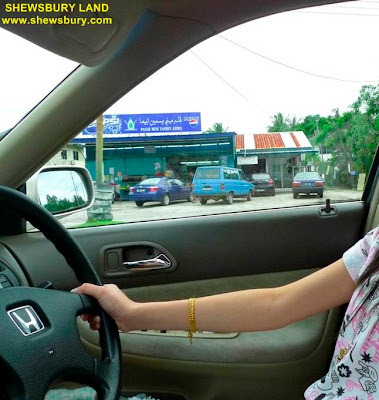 We first went to this popular local coffee shop or rather "kopi tiam" to try this local "Pulut Panggang". Many told me that the "Pulut Panggang Tutong" is one of the best food after McDonalds Big Mac Burger.

"Pulut Panggang" is a type of traditional Malay "kuih" in Brunei and Malaysia, which is a glutinous rice wrapped in pandan leaves with some sort of "filling" inside it, usually prawn but they are some variation of using meat. They cooked this pulut panggang over a fire.

This Mei Fang Cafe (or rather "kopi tiam") is located at one of the oldest shop house block in Tutong Town. 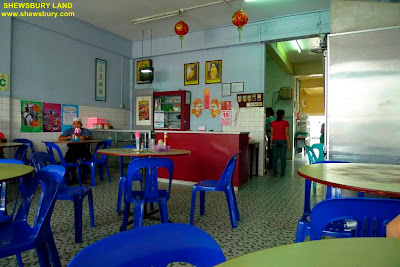 This is the building, this photo was taken at around evening, by that time they already closed. 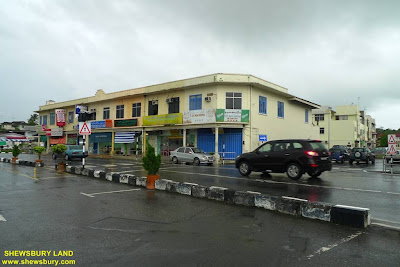 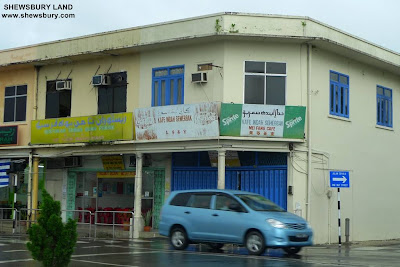 Just like any other "kopi tiam" the menus typically feature simple offerings: a variety of foods based on egg, toast, and kaya, plus coffee, tea, and Milo, a malted chocolate drink which is extremely popular in Southeast Asia. They also have those fried noodles stuff.

Apparently, by the time we arrived there, the "pulut panggang" is finished, they said usually it is available till around 11.00am and maybe close to lunch time and usually it will surely be gone by that time - finished - sold out....


And thus, to control our sexual desire, we decided to just get what ever stuff they have at that time. I decided to choose the "NesLo" and that "tau sa pau" while QQ choose hot tea and that white and green thing, I don't know the name but I always call it "white and green food" ever since I was small.

"NesLo" is actually a hot drink combination of Nescafe and Milo - both the product of Nestle. Many believe that it can prolong your sexual ejaculation experience though I'm not sure if it's true. 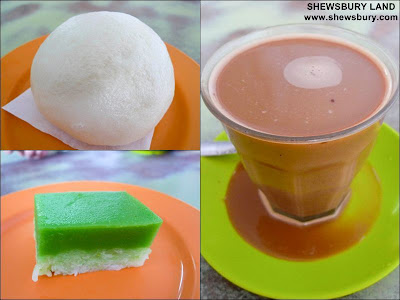 From there onwards, QQ then drive around the town and tell me lot's of interesting stories along the way and while listening to her I also managed to snap some scenery photos;

This guy love to collect that thing... what ever it is... quite a collection he have there... 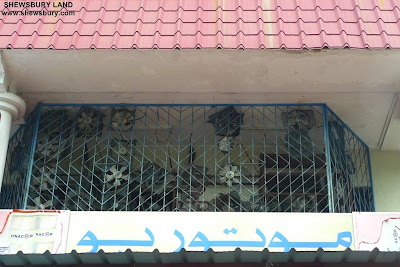 And more scenery of Tutong Town; 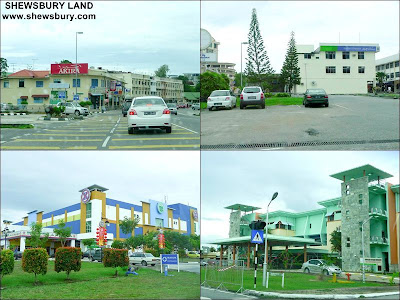 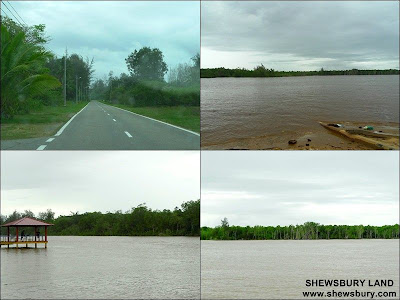 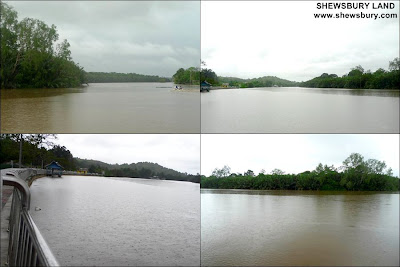 According to QQ, over the years, there are several notable changes happens around the town and that also includes the commercial and economic scenario in which also influenced the people, the density and the traffics around the town.

It's good that now the town have this big departmental store (something like that Arumugam Departmental Store in Shewsbury Land) but direct or indirectly that also affect some small business around the town. It's a matter of opinion but the at the end in business world, however way you look at it, the concept is the same; it is cruel but only the fittest can survive and nothing else. Thus in business world, one must willing to keep on changing and evolve to become better and greater all the time.


The town is not that big actually and once done we then went to the beach area again and QQ brought me to this secluded quite area to enjoy the scenery here; 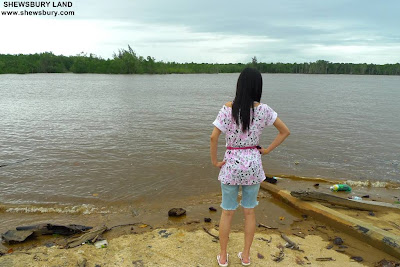 She said, if I'm lucky, I might be able to see some crocodile... 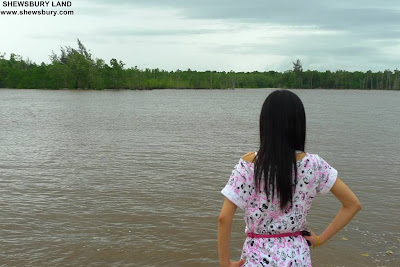 QQ also brought me to her beach mansion and I saw this dog; 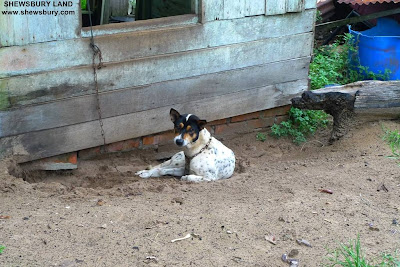 According to QQ, she used to play a lot around this thing when she was small. Many years passed by, the sands slowly "eat" it and this the left over now... used to be bigger than this she said.. 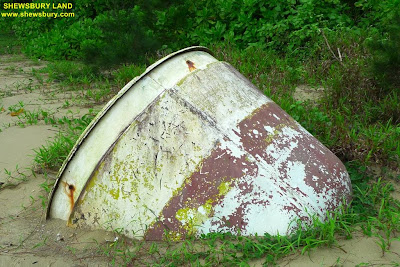 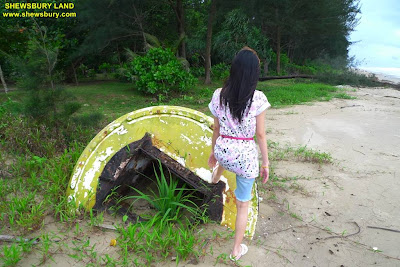 Well, since it's rainy days... not much we can do anymore... that's about it... we try to play "run and catch" on the beach but the rain doesn't allow that to happen...

And lastly a couple of photos of Tutong Town scenery during rainy days.... 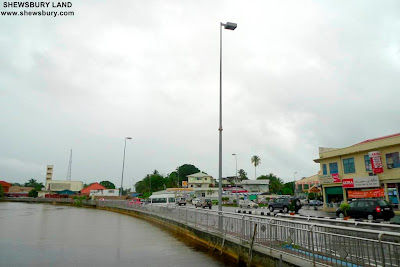 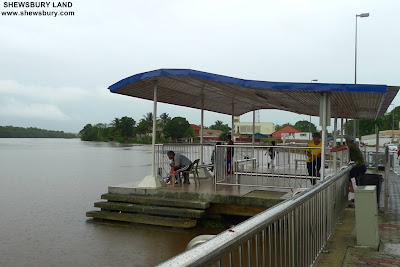 By the way, seriously, for a 2.0L powered engine, this Gouf of mine (I also like to call it Cherry Wong) have such a small wheel size. The body is in fact the same as other saloon cars like Toyota Vios or maybe something like Toyota Corolla.... Oh well, never mind, most important this bloue dragon works perfectly well.

This last photo is some sort of "DJ was here in Tutong"... 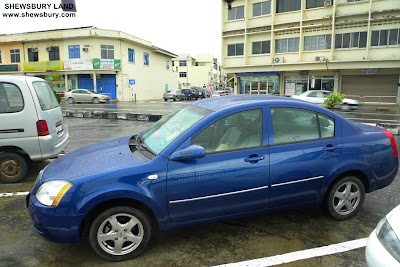 Next target is Kuala Belait and Seria town in Belait....