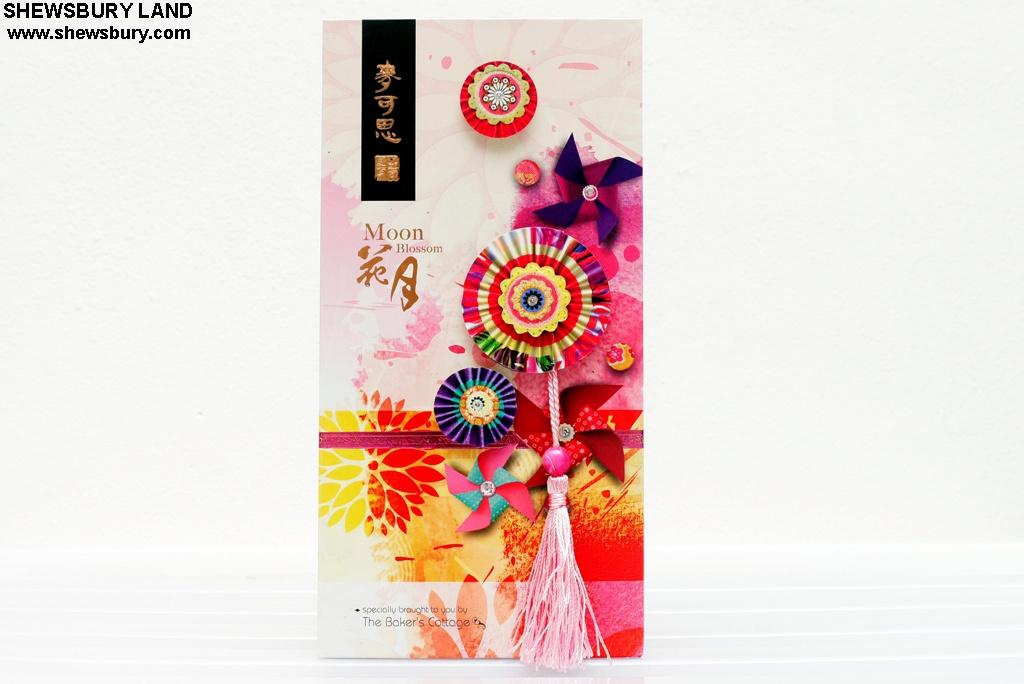 Chinese moon cake is one of my favorite food from the traditional Chinese delicacy and this year, just like the previous year, we bought quite a number of moon cake and eat lots of them because this is the only time of the year you can find this item and if you missed them, you have to wait again next year.

Moon cake (月饼 / yuè bĭng) is a Chinese bakery product traditionally eaten during the Mid-Autumn Festival (Zhongqiu) – this year the event is on September 2013 - same as last year, and the year before LOL

The festival is for lunar worship and moon watching and this is when moon cakes are offered between friends or family gatherings while celebrating the festival and this Mid-Autumn Festival is one of the four most important Chinese festivals.

In the modern era, the box and packaging of moon cake seems to improve further and nowadays even the box looks quite pretty that made you wanna buy them just because the box is so gorgeous!!! - well, at least that's the case for me LOL... 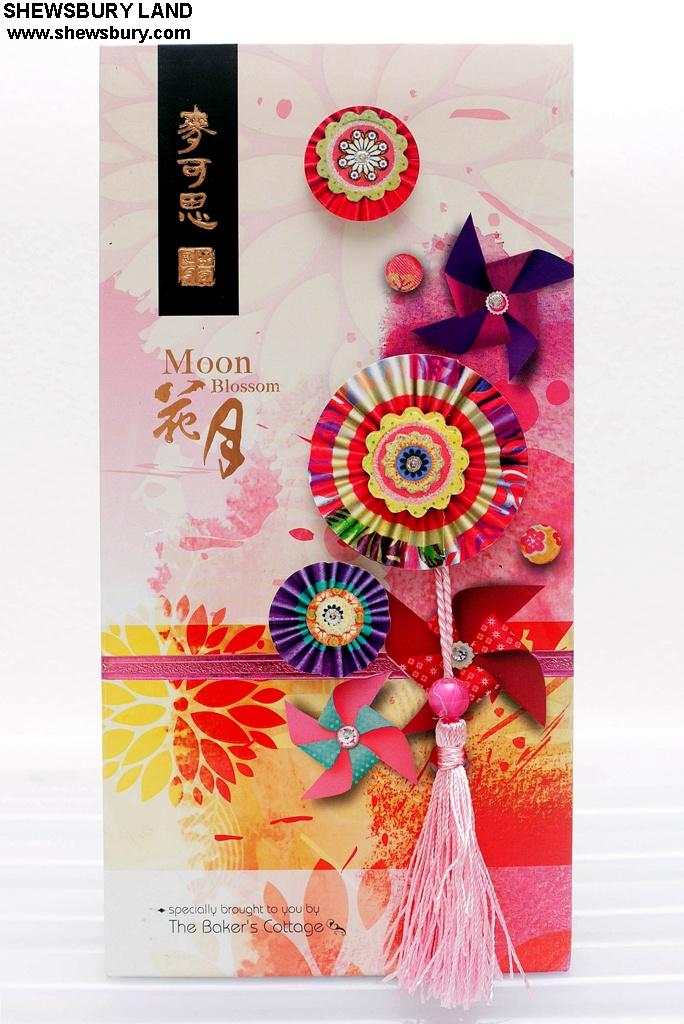 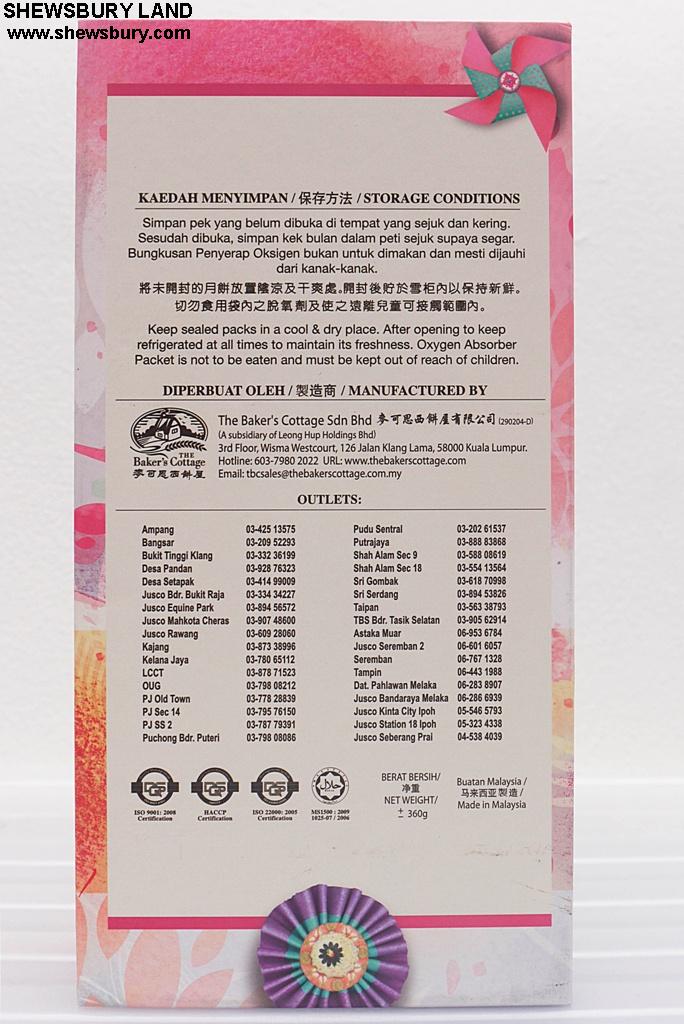 Look at this box...  I personally think that it's quite beautiful; 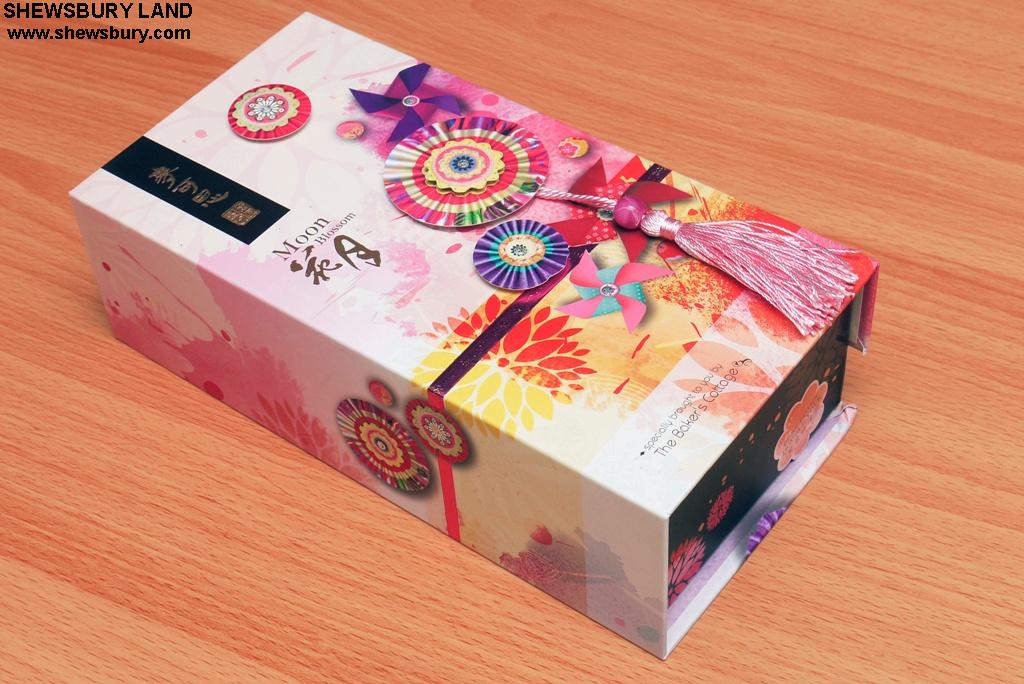 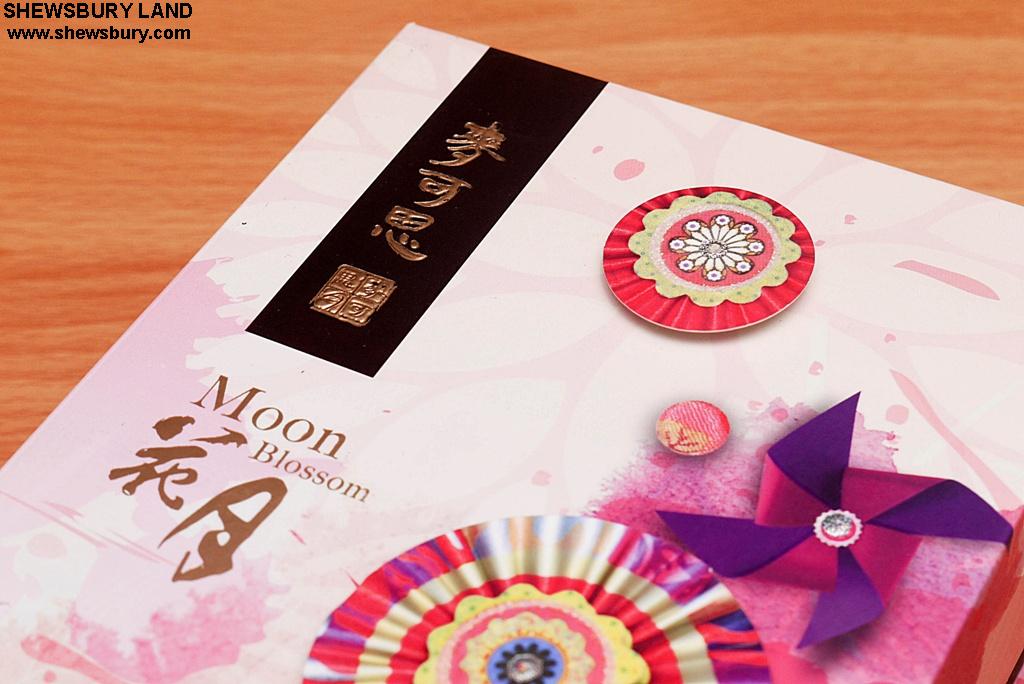 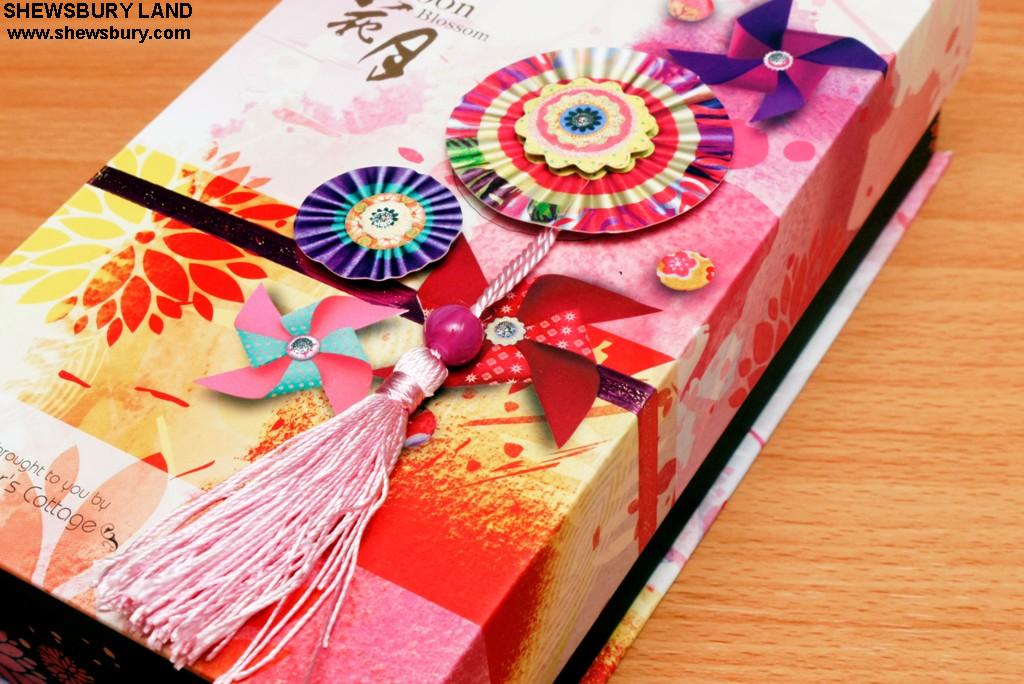 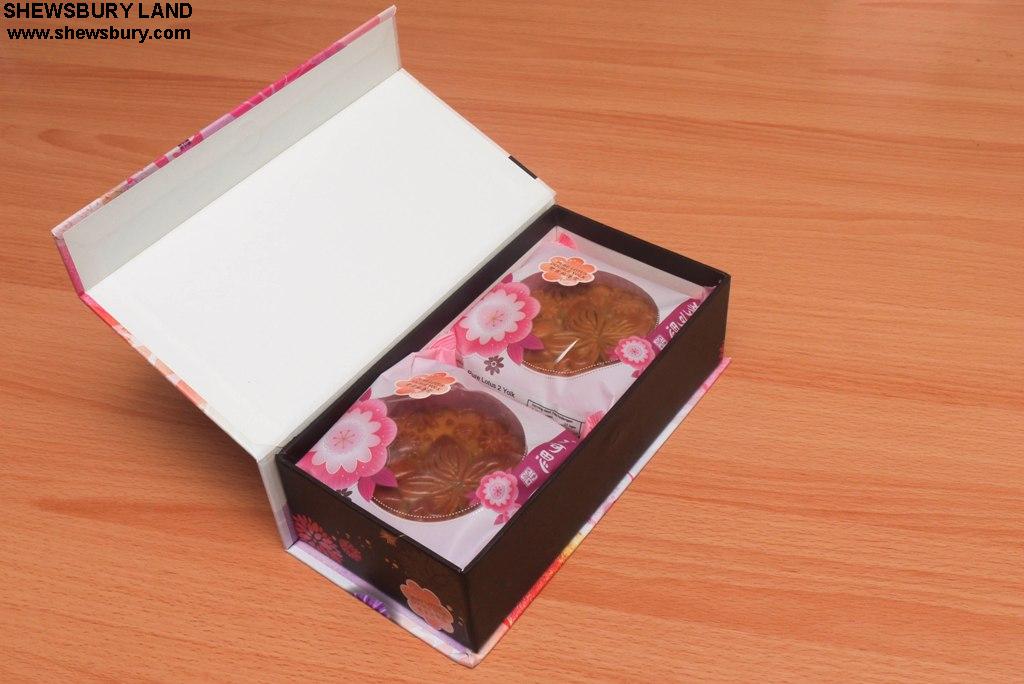 This is the twin pack version thus you will find 2 moon cakes inside - you can also buy the 4 packs, 8 packs and so on - which means the box getting bigger and bigger; 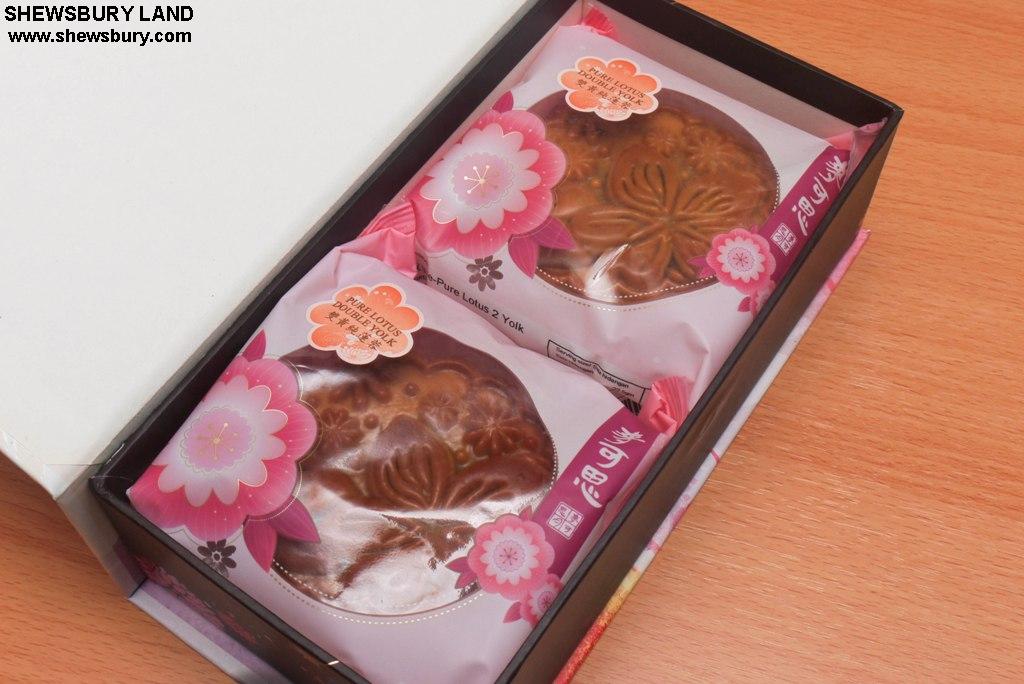 Also included in the packaging is a plastic cutting knife - wonderful!!! 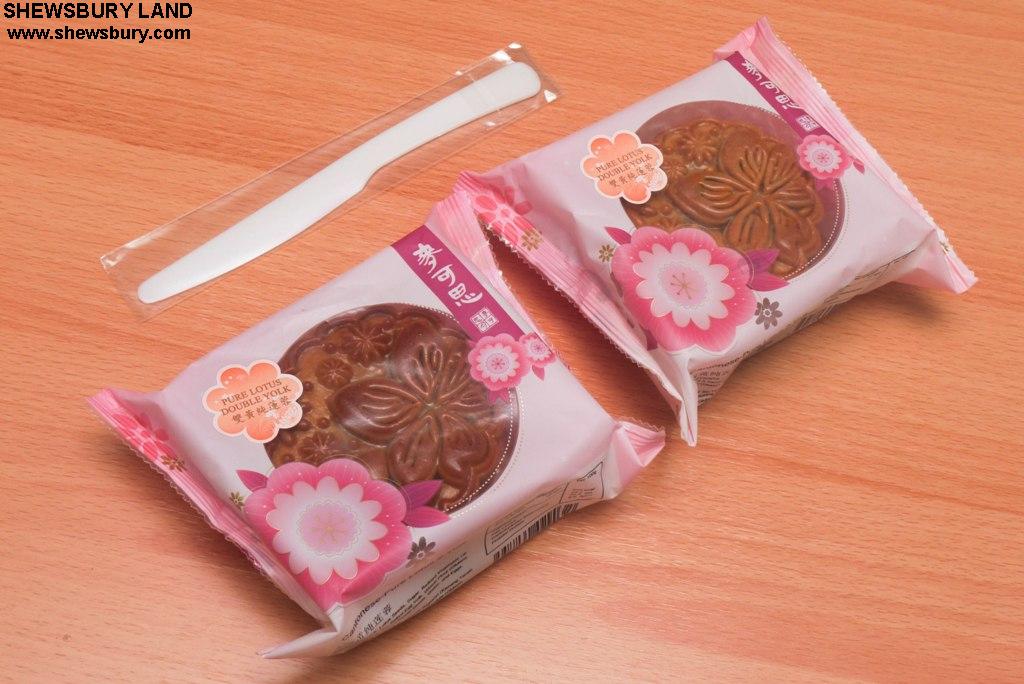 That pink packaging make you believe that this is too gorgeous to be eaten LOL; 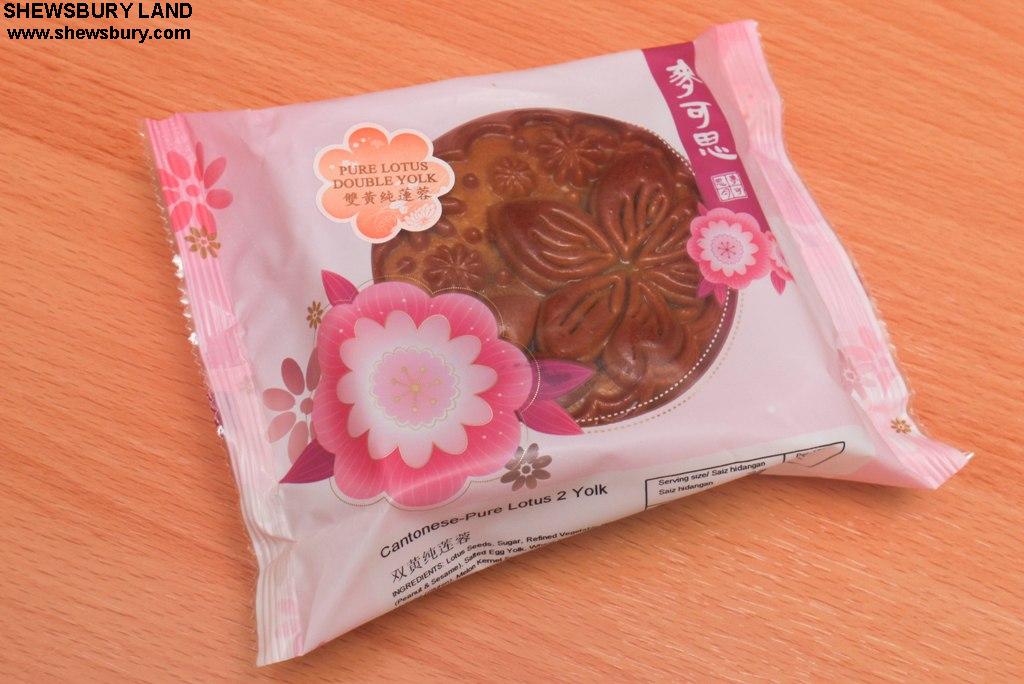 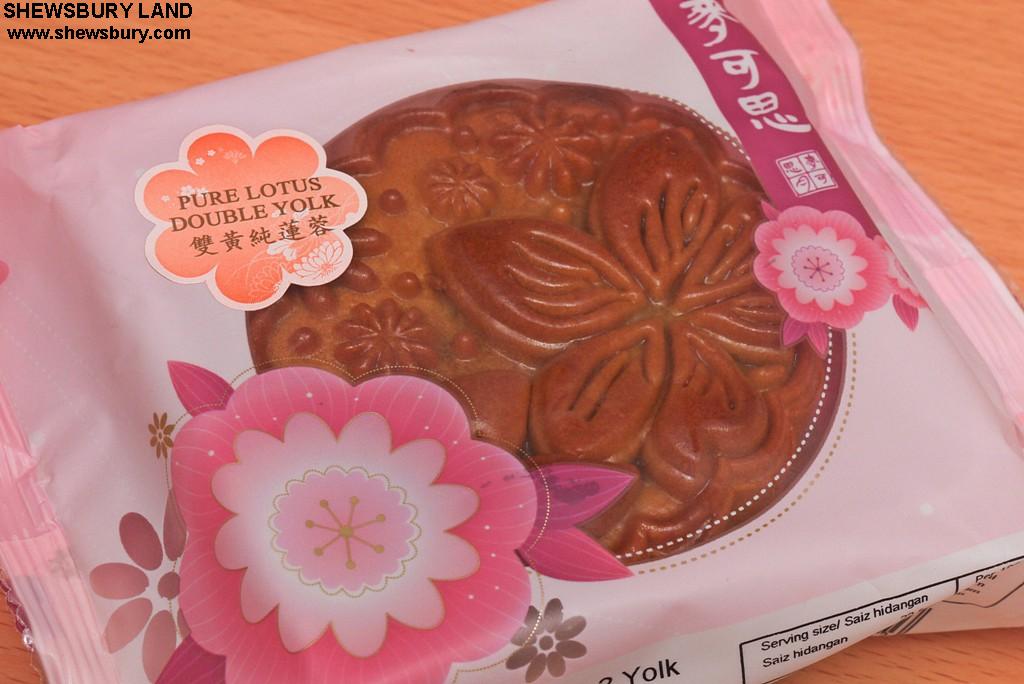 This is now the moon cake out of the packaging; 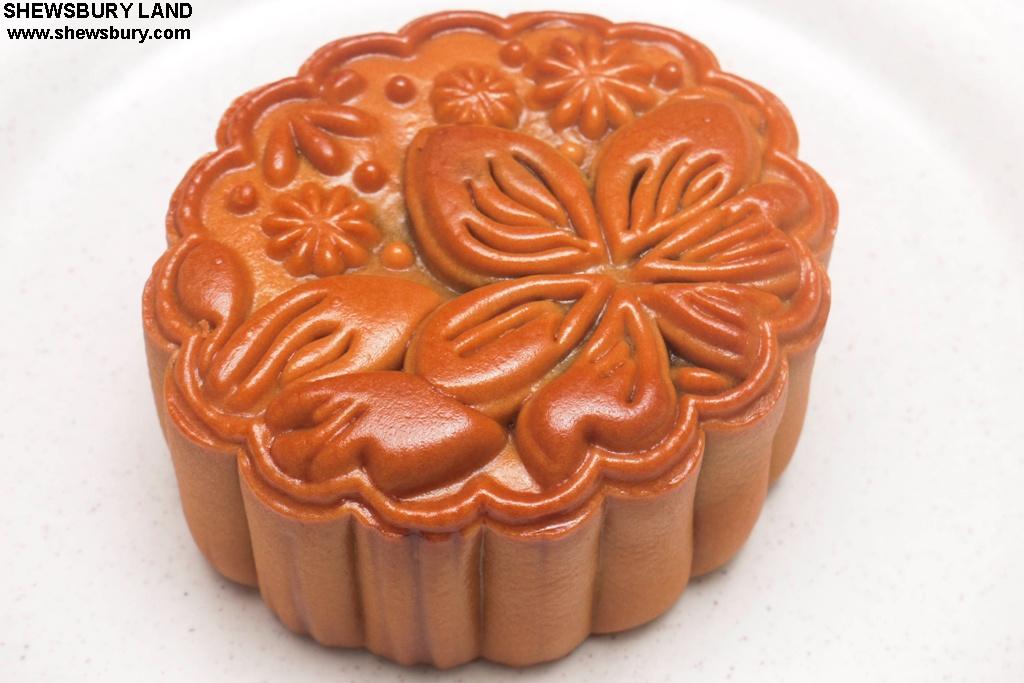 The flower imprint at the top looks quite nice; 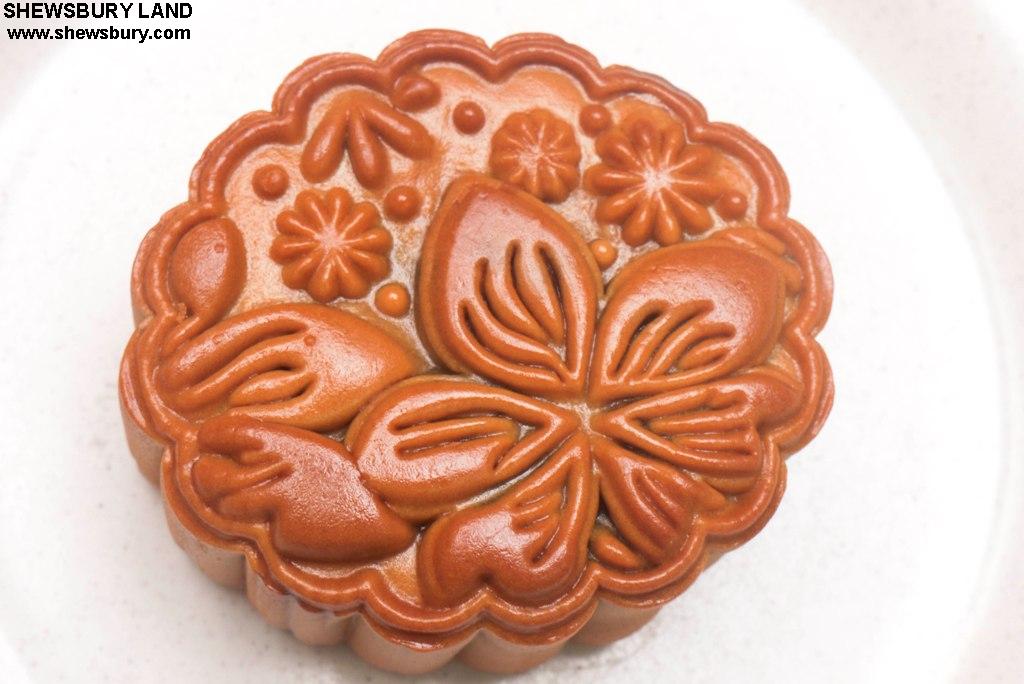 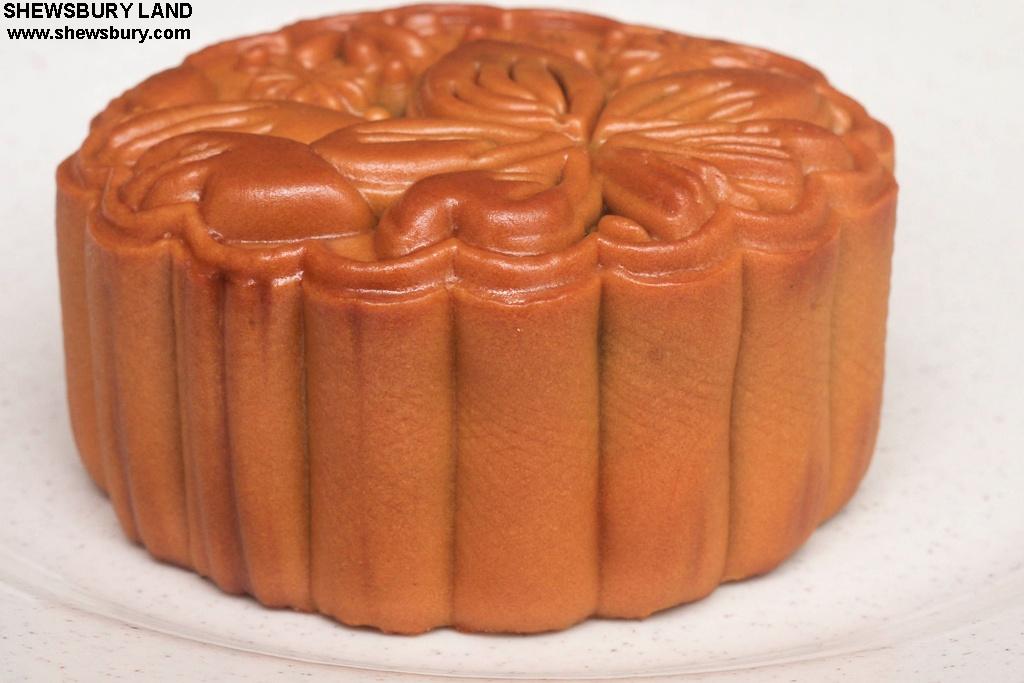 Typical moon cakes are round (and sometimes rectangular) pastries, measuring about 10 cm in diameter and 4 to 5 cm thick. A rich thick filling usually made from red bean or lotus seed paste is surrounded by a thin (2 to 3 mm) crust and may contain yolks from salted duck eggs. Moon cakes are usually eaten in small wedges accompanied by Chinese tea though if you prefer Ribena or Coca Cola or even beer then it's up to you though.

Moon cakes are considered a delicacy as production is labor-intensive and few people make them at home. Hence, most prefer to buy them from commercial outlets, which may range from smaller individual bakery shops to high-end restaurants. The price of moon cakes in here is usually ranges from SGD 5.00 (about US$3.90 / EUR 3.00 / 392 Yen) to SGD 8.00 (about USD 6.30 / EUR 4.70) each though its normal that sometimes cheaper and more expensive moon cakes can also be found. 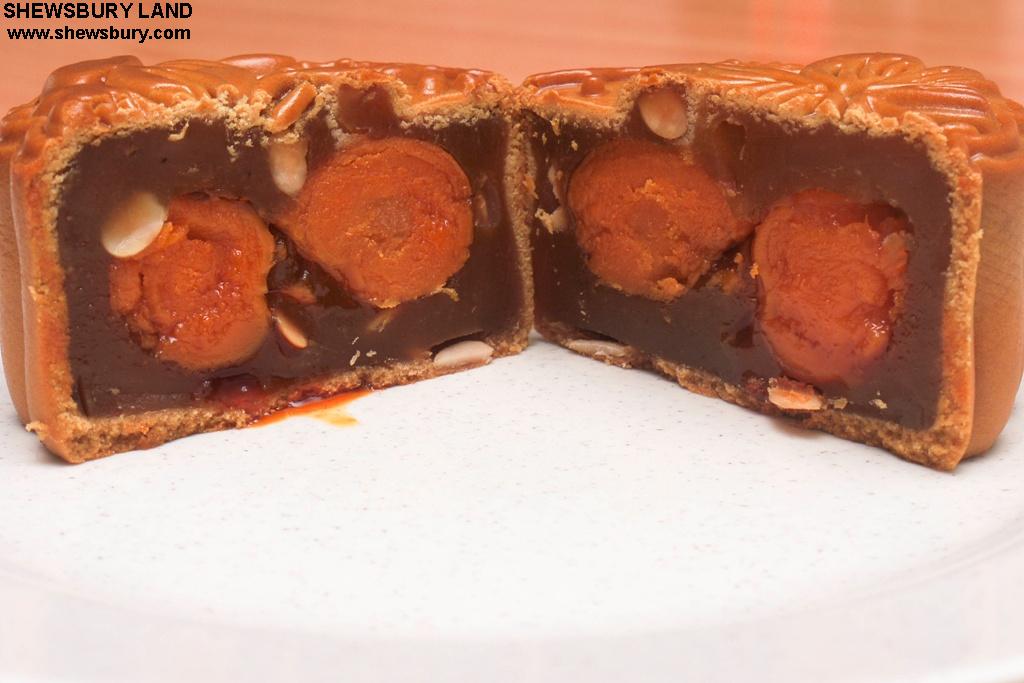 Most moon cake consist of a thin, tender pastry skin enveloping a sweet, dense filling, and may contain one or more whole salted egg yolks in their center as the symbol of the full moon. 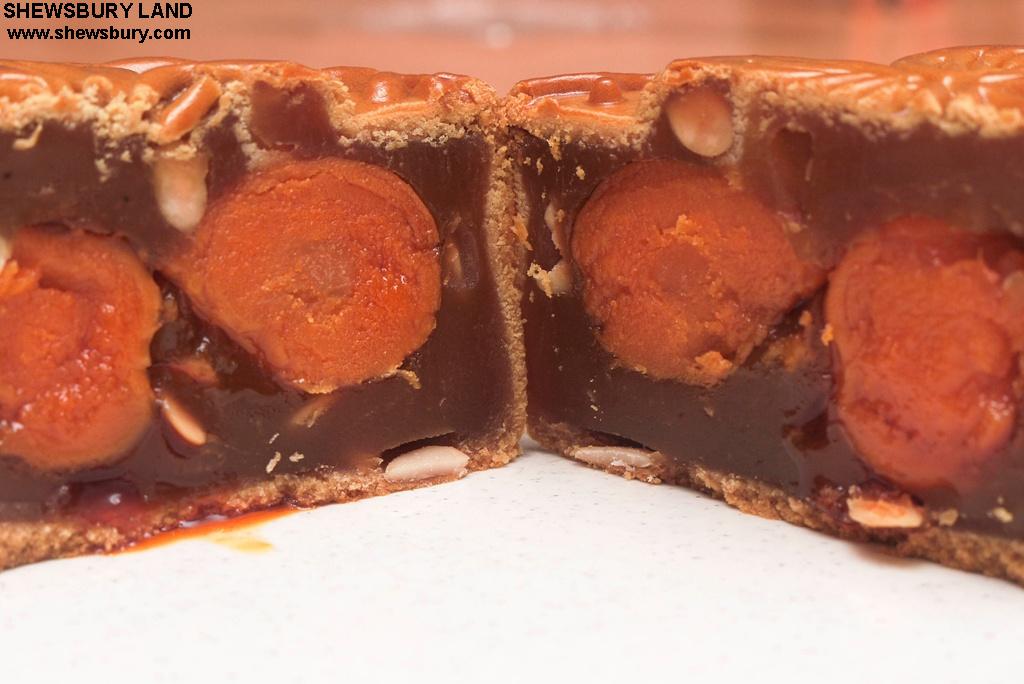 History wise, they have several theory about the connection of moon cake and Mid-Autumn Festival. The festival is intricately linked to the legends of Chang E, the mythical Moon Goddess of Immortality and because of its central role in the Mid-Autumn festival, moon cakes remained popular even in recent years. For many, they form a central part of the Mid-Autumn festival experience such that it is now commonly known as 'Moon Cake Festival'.

During the Ming revolution, there is a folk tale about the overthrow of Mongol rule facilitated by messages smuggled in moon cakes. Moon cakes were used as a medium by the Ming revolutionaries in their espionage effort to secretly distribute letters to overthrow the Mongolian rulers of China in the Yuan dynasty. The idea is said to have been conceived by Zhu Yuanzhang (朱元璋) and his advisor Liu Bowen (劉伯溫), who circulated a rumor that a deadly plague was spreading, and the only way to prevent it was to eat special moon cakes. This prompted the quick distribution of moon cakes, which were used to hide a secret message coordinating the Han Chinese revolt on the 15th day of the eighth lunar month.

Another method of hiding the message was printed in the surface of mooncakes as a simple puzzle or mosaic. To read the encrypted message, each of the four mooncakes packaged together must be cut into four parts each. The 16 pieces of mooncake, must then be pieced together in such a fashion that the secret messages can be read. The pieces of mooncake are then eaten to destroy the message - a trick which even the famous British Detective - Sherlock Holmes find to be tricky but interesting. 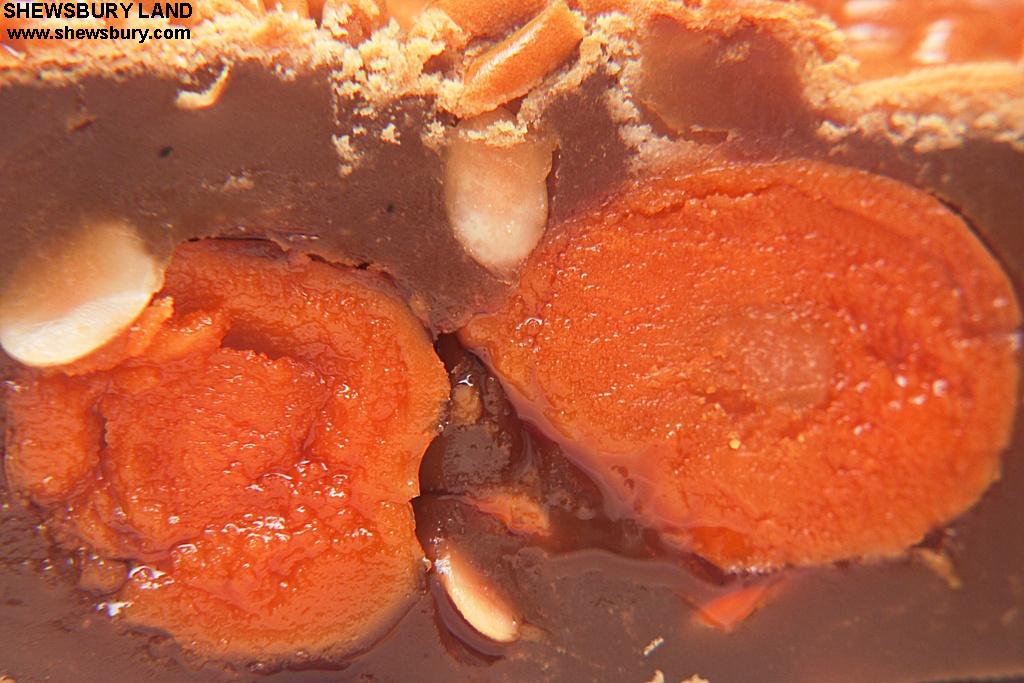 As for this moon cake that we bought and reviewed here, the box packaging is very attractive and in fact quite gorgeous for me while the finishing and the taste of the moon cake is exactly as expected - very very yummy!!!!! It's so nice that I feel wanna get more of them LOL