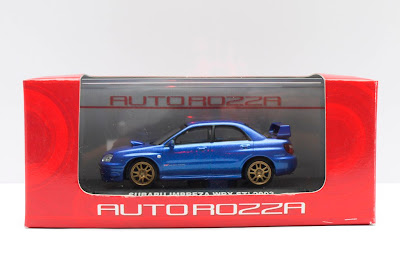 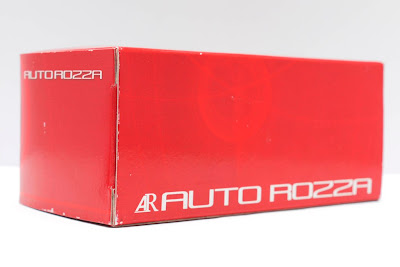 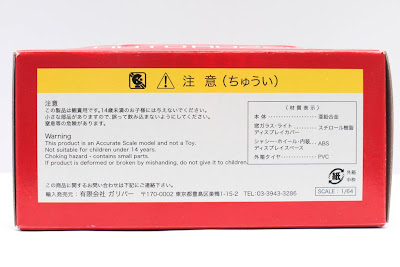 This is a 1/64 scale die cast car model of Subaru Impreza WRX STi produced by some company that I don't know who but 1 thing for sure is that they are using "Auto Rozza" as their brand name.

Subaru Impreza is a compact automobile, manufactured since 1992 by Subaru, the automobile division of Japanese transportation conglomerate, Fuji Heavy Industries (FHI). Subaru introduced the Impreza as a replacement for the Leone, with the Leone's EA series engines replaced by the newer EJ series versions.

Now in its 4th generation, Subaru has offered four-door sedan and five-door hatchback body variants since 1992; the firm also offered a coupe from 1995 for the first generation only. Mainstream versions have received naturally aspirated "boxer" flat-four engines ranging from 1.5- to 2.5-liters, with the performance-oriented Impreza WRX and WRX STI models uprated with the addition of turbochargers. Since the third generation series, some markets have adopted the abbreviated Subaru WRX name for these high-performance variants.

This particular one is from the 2nd generation (2000 to 2007). Subaru introduced the "New Age" Impreza to the world market in 2000. Larger in size compared to the previous iteration, the sedan increased its width by 40 millimetres (1.6 in), while the hatchback notably increased by just 5 millimetres (0.2 in)—placing the two variants in different Japanese classification categories. The coupe body style from the first generation did not reappear for the new series.
Naturally aspirated flat-four engines comprised the 1.5-liter EJ15, the 1.6-liter EJ16, the 2.0-liter EJ20, and the 2.5-liter EJ25. Turbocharged versions of the 2.0- and 2.5-liter engines were offered in the WRX and WRX STI models.

Let's have a look at this die cast car model.... out of the box/packaging; 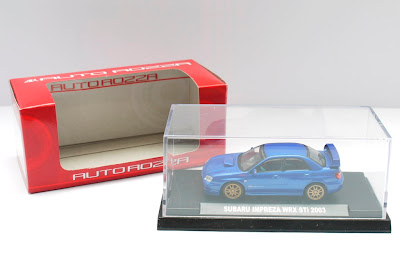 They give us the clear acrylic display case with the name of the car printed on the base which is a nice bonus indeed; 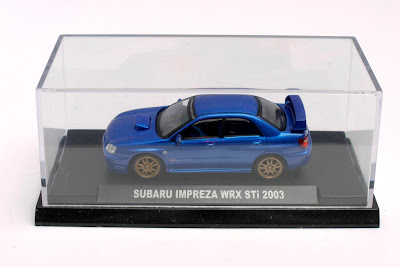 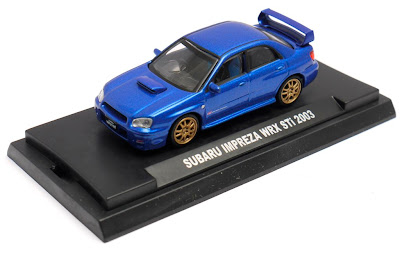 The first thing I did is to look at the bottom part of the chasis just to see if they are using screw or rivets... you find the answer from the picture below; 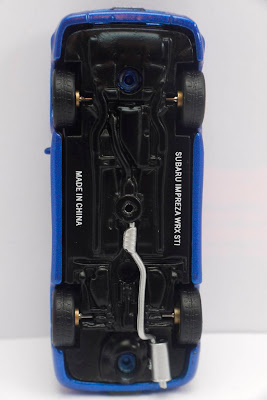 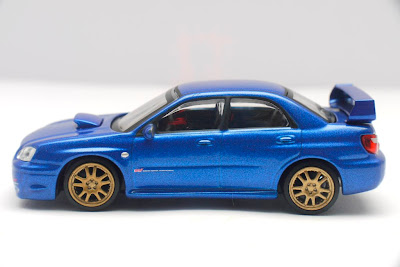 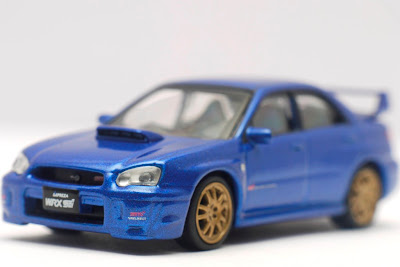 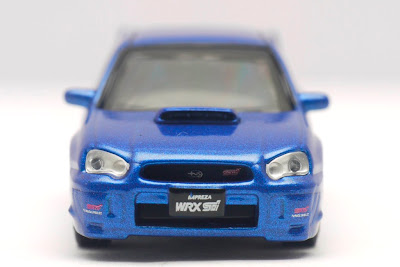 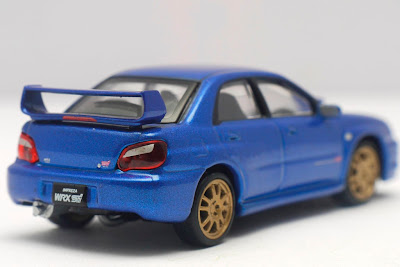 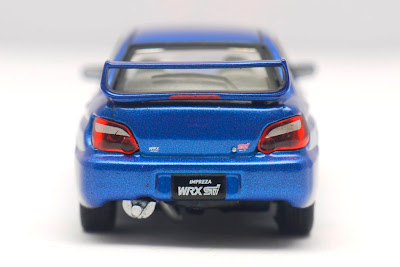 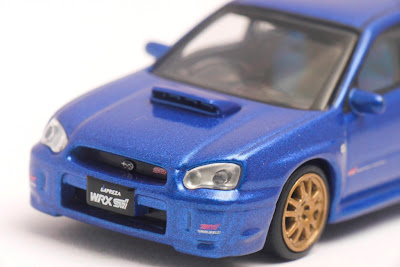 Nice wheels design and color selection there and they also use rubber tires; 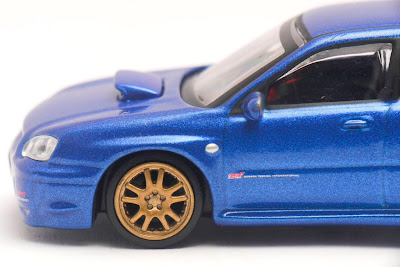 The head/tail/brake lights are made of using plastic part which is brilliant; 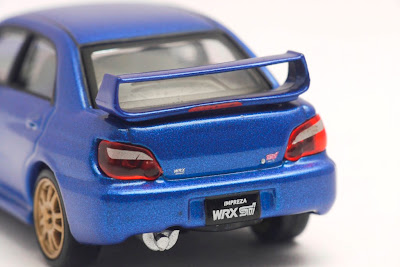 There is no openable door features on this car but I think it's OK since the clear acrylic display case and the display base with the car's name printed on it compensate the non-openable door issue; 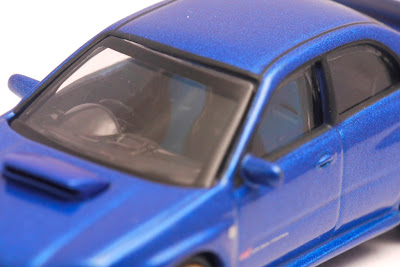 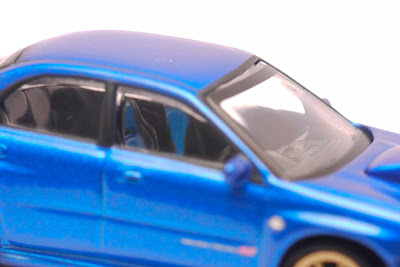 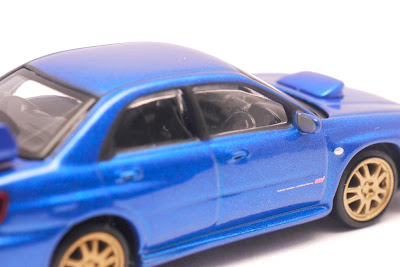 Overall, this is a brilliant die cast car model at 1/64 scale for Subaru Impreza WRX STi. I think Auto Rozza, being an unknown and new brand for me have done quite a brilliant job on this item. Considering the decent local price of SGD 18.00 (about USD 14.45 / EUR 11.70 / 1,132 Yen) which is not much difference if compared to those from Tomica Limited series and surely if I have to choose between the Subaru Impreza WRX STi from Tomica Limited and this Auto Rozza, my choice will surely be this one, no doubt about it. I don't really care who is the manufacturer but if they have great product surely we will buy right? I look forward to see more models coming out from this brand. 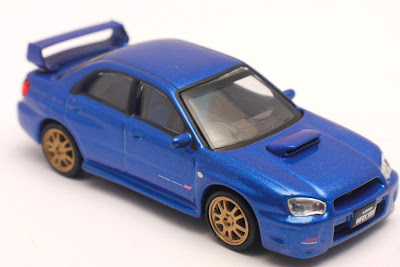 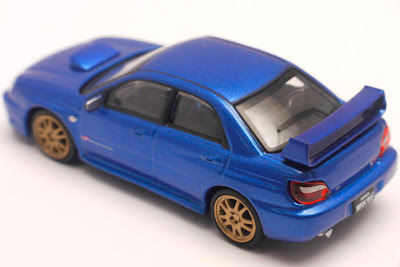 The Impreza with the other 1/64 scale cars in our collection; 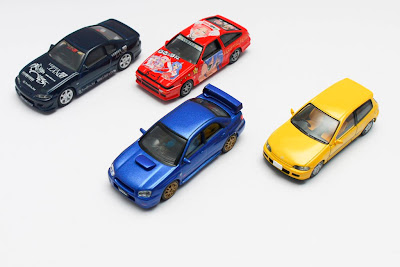 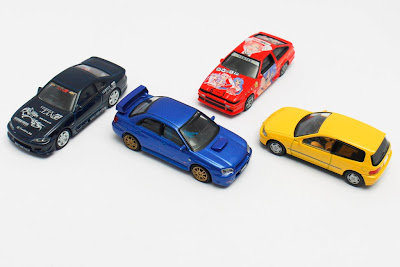 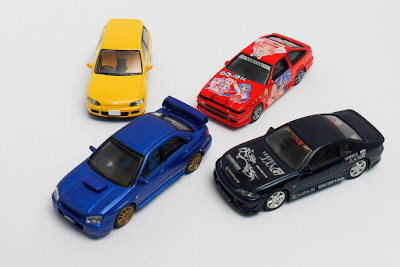 All these cars appear in the popular drift anime "Initial D"; 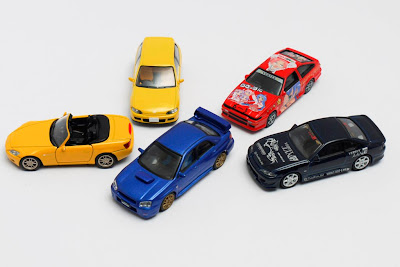 And now we should add the Miata MX5 as well.... 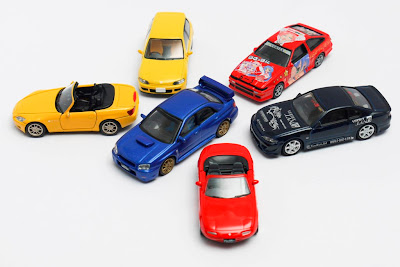 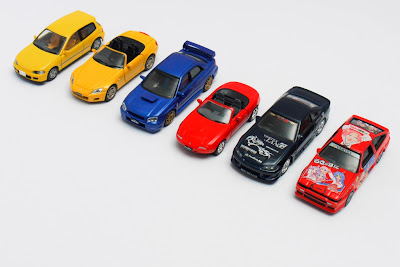