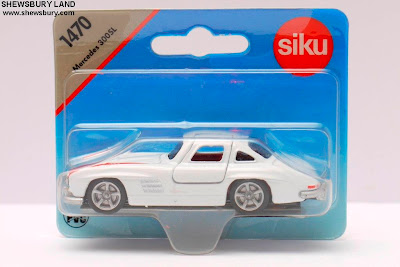 This is a die cast car model of the legendary Mercedes-Benz 300SL produced by Siku.

Mercedes-Benz 300SL was the first iteration of the SL-Class grand tourer and fastest production car of its day. Internally numbered W198, it was introduced in 1954 as a two-seat sports car with distinctive gull-wing doors and later offered as an open roadster built by Daimler-Benz AG.

The "300" in its name referred to its three litre engine displacement, and "SL" stood for "Sport Leicht" (Sport Light).

The 300SL was best known for its distinctive gull wing doors, first-ever consumer fuel-injection, and world's fastest top speed. The gull wing version was available from March 1955 to 1957, the roadster from 1958 to 1963.
Pablo Escobar, the legendary farmer in Colombia had 3 units of this car though not many knew if that is true either but more importantly not many of this car still exist today and thus not many people can afford to buy them as the price can be extremely high because this car is considered to be one of the best classic sports car by Mercedes Benz. Nonetheless, at least many of us can still afford to get this scaled die cast model and we can always buy more than 1 :-) 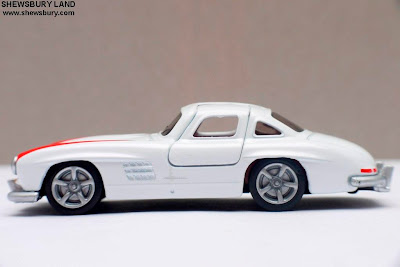 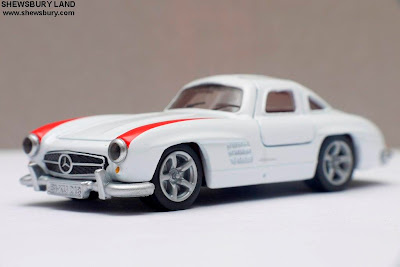 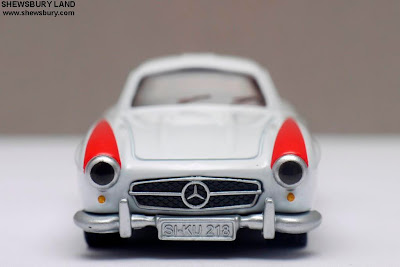 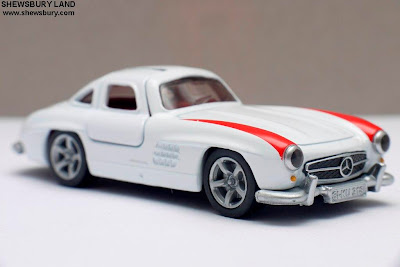 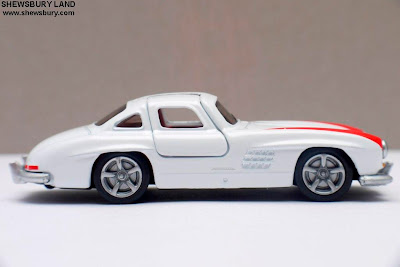 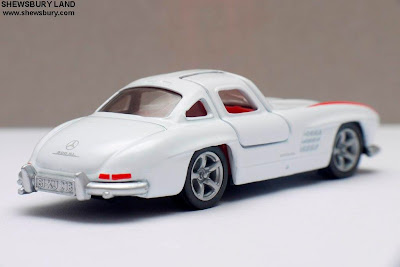 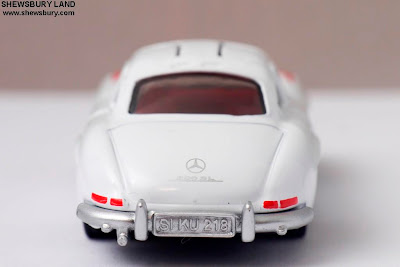 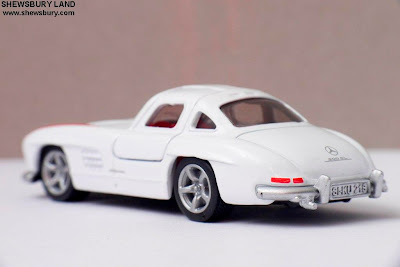 Painting finishing is very good and the same for the exterior detailing as well. We can see the prominent Mercedes Benz logo of 3 silver arrow at the front; 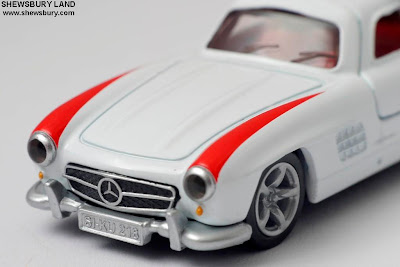 Wheels detailing is quite decent, at least better than those standard type from Tomica and Hot Wheels; 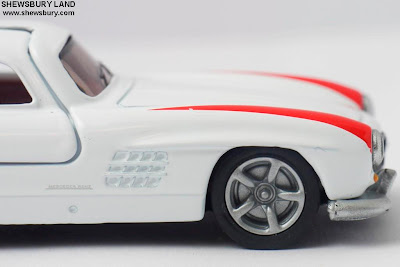 At the rear part, we can see the Mercedes Benz logo again as well as the car model name "300SL"; 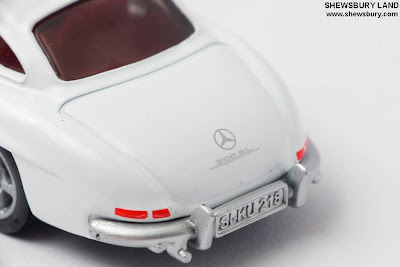 This car have openable doors - yeah, the "gull-wing doors"; 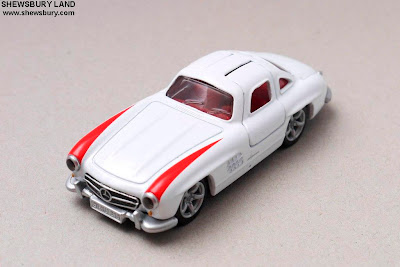 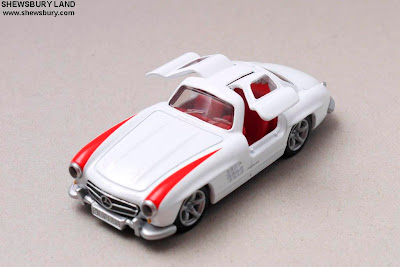 And we can see a little bit of the interior detailing; 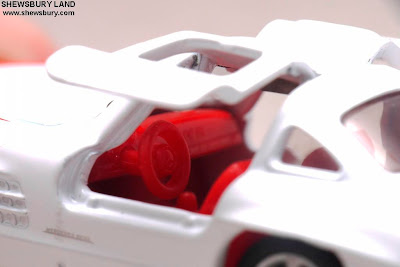 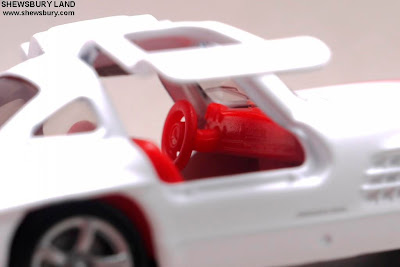 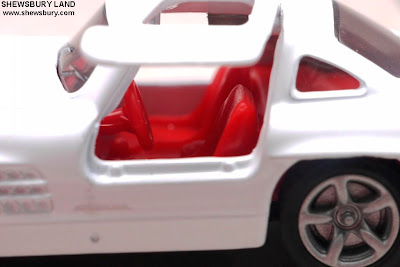 Though the interior detailing is not as great as those from larger scale but then again we must remember that this is quite a small scale and thus I believe Siku have done a great job with the interior detailing especially on the dashboard part. I personally dislike the fact that they use single colors for all the interior, those seats I think is OK to be read but the dashboard and steering wheel should be better in black. In fact, an all black color would be more suitable or probably it is just my fussy personal taste.

Underneath the chasis which is unique to this brand, we can see some technical spec. information about this car; 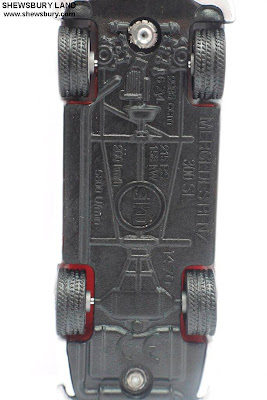 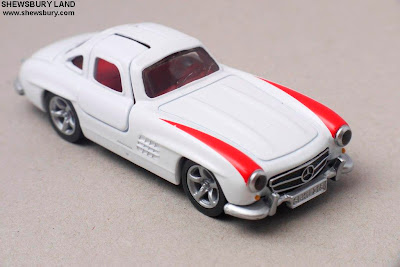 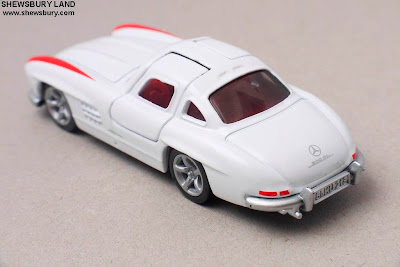 Overall, this is a brilliant die cast car model of the legendary classic Mercedes Benz 300SL. The paint job finishing and exterior detailing is very good, comes with rubber tires and decently detailed wheels and not to forget those little info underneath the chasis. This is the cheapest way to owned a Mercedes 300SL. I never thought I could find this car model on this scale as in fact recently I did saw a 1/18 scale version from Burago and hell it's quite delicious and just a few days later, I saw this model and grabbed it without second thought.

Side by side with the modern Mercedes SLS; 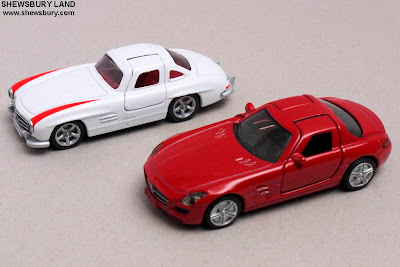 You can read the review of the Mercedes SLS from the link below; 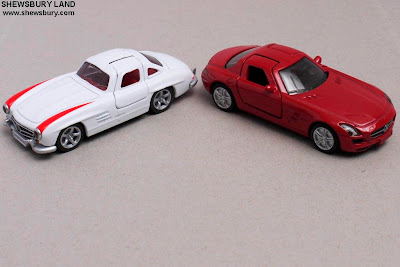 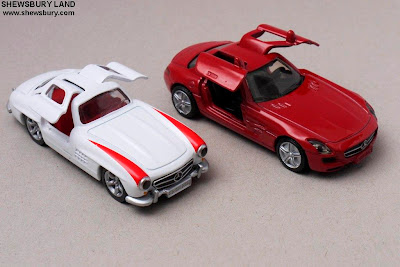 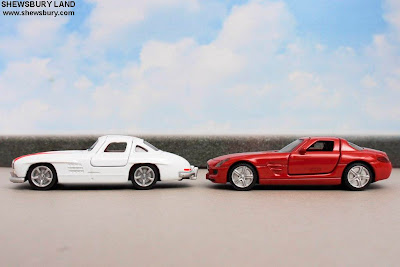