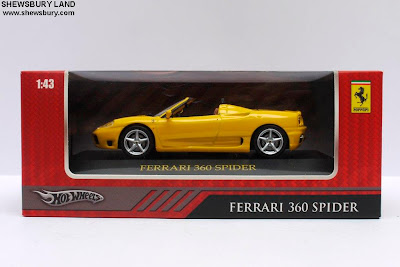 This is a die cast car model of "Ferrari 360 Spider" in 1/43 scale produced by Hot Wheels.

As a big fan of roadster, this car model is attractive for me especially after considering that its a model from the famous Italian stallion - none other than Ferrari.

Obviously, typical poor marijuana and vegetables farmer like me can't afford to buy the real "Ferrari 360 Spider" but thanks to Hot Wheels, I can at least grabbed this item at a decent price.
The Ferrari 360 is a 2 seater sports car built by Ferrari from 1999 to 2005. It succeeded the Ferrari F355 and was replaced by the Ferrari F430. It is a mid-engined, rear wheel drive V8-powered coupe.
The first model of the 360 to ship was the Modena, named after the town of Modena, the birthplace of Enzo Ferrari. The Modena went into production in 1999 and remained in production until 2005 when it was replaced by the F430. The Modena was followed 2 years later by the 360 Spider.

The 360 Spider is Ferrari's 20th road-going convertible. The 360 was designed with a Spider variant in mind; since removing the roof of a coupe reduces the torsional rigidity, the 360 was built for strength in other areas.

In car body type glossary, "spider" is similar to a "roadster" but originally with less weather protection. The term originated from a small two-seat horse cart with a folding sunshade made of four bows. With its black cloth top and exposed sides for air circulation, the top resembled a spider. Nowadays it simply means a convertible sports car.

As with the Modena version, its 3.6 litre V8 with 400 bhp (300 kW) is on display under a glass hood. The engine - confined in space by the convertible's top's storage area - acquires additional air supply through especially large side grills. The intake manifolds were moved toward the center of the engine between the air supply conduits in the Spider engine compartment, as opposed to lying apart as with the Modena. In terms of performance, the 0-60 time was slightly slower at 4.4 seconds due to the slight weight increase, and the top speed was reduced from 304 km/h to 289 km/h.

Despite the car's mid-mounted V8 engine, the electrically operated top is able to stow into the compartment when not in use. The transformation from a closed top to an open-air convertible is a two-stage folding-action that has been dubbed "a stunning 20 second mechanical symphony". 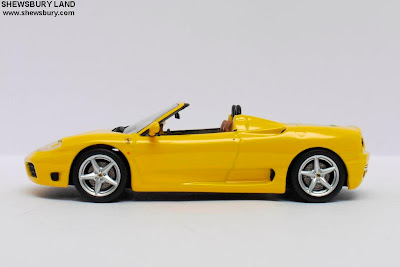 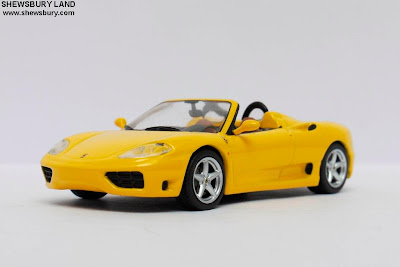 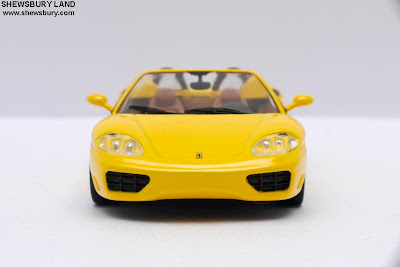 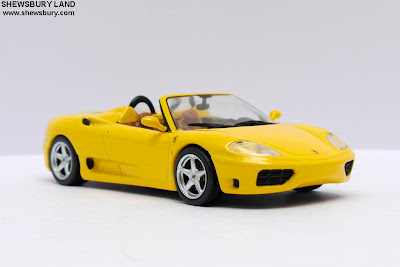 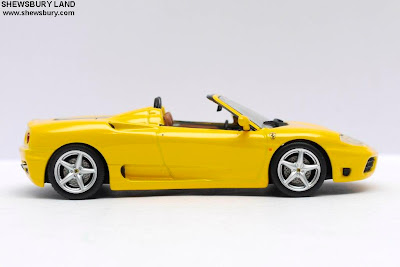 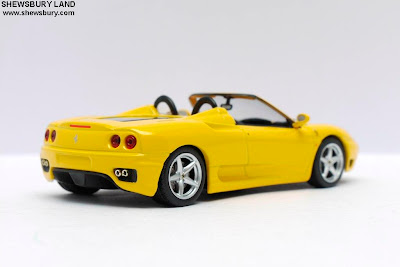 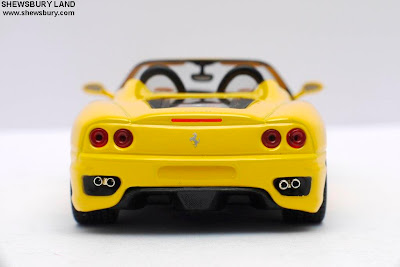 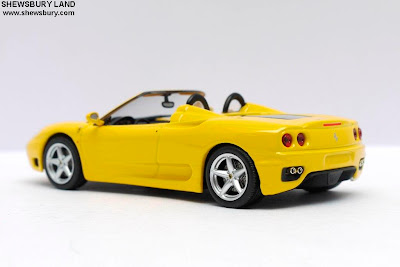 The build quality, painting finishing and detailing is not overly gargantuan deal but indeed it is very good, exactly what we could expect from Hot Wheels at this scale and price level. On the exterior detailing, Hot Wheels use plastic parts for the head lamps and we can see the logo of Ferrari accurately and prominently displayed on the car body accordingly; 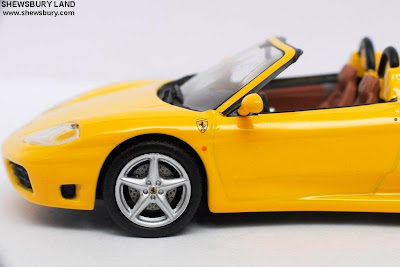 Hot Wheels did a great job on the detailing part of this Spider's 3.6L V8 engine at 1/43 scale which is amazing. Again, it would be great if this come with openable engine hood so we can see more on the engine but then again it's difficult to get such features at this price range (SGD 20.00 / USD 16.00 / 1,260 Yen). 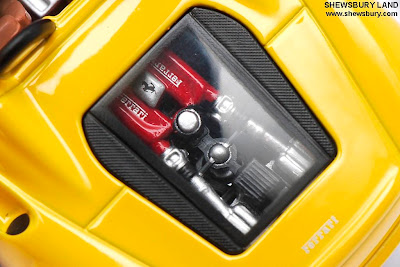 The detailing on the rear part are as good as it gets, tail lights from plastic, prominent Ferrari logo and beautiful looking exhaust pipe; 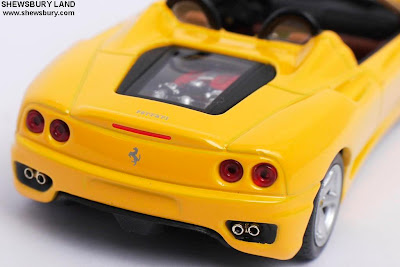 One of the most striking features on this car is the interior detailing - well, at least for me personally, let's have a close look and this is when our Macro lens is useful; 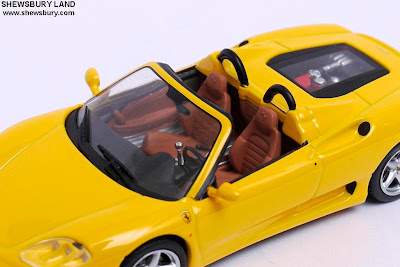 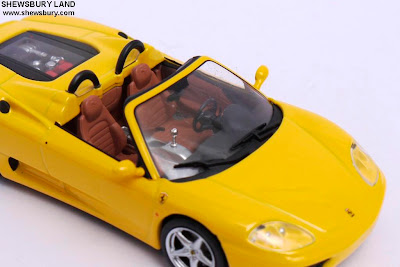 As you can see from this angle, all the panels and dashboard detailing is not perfect but in fact you can't deny that it looks pretty good as well and I love it; 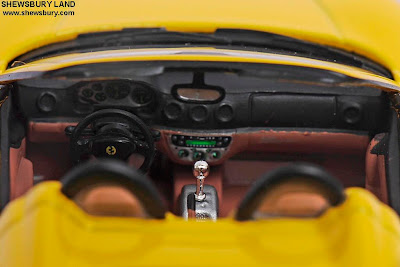 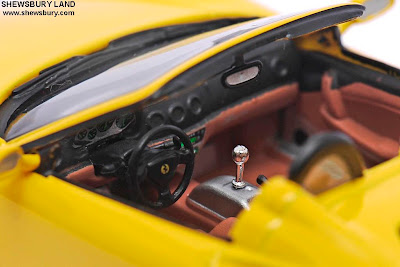 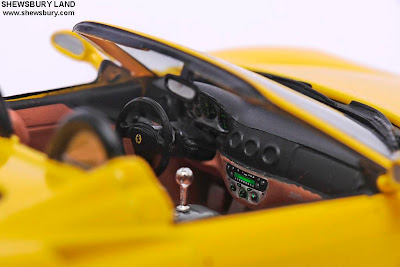 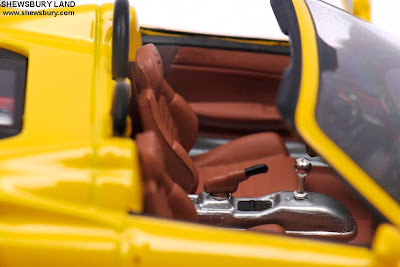 And when you look closely on that seat, you can see the "engraved" prancing horse of Ferrari; 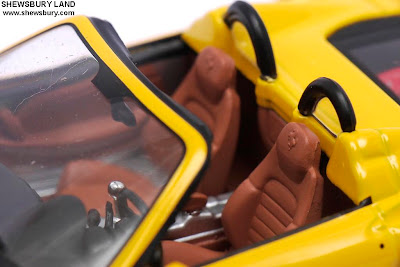 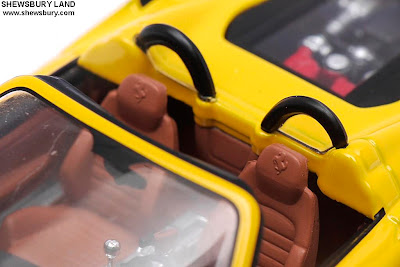 I think this is one of the best interior detailing with beautiful color scheme choice for a die cast car model at 1/43 scale, no doubt about it.... 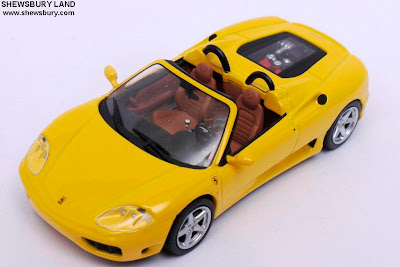 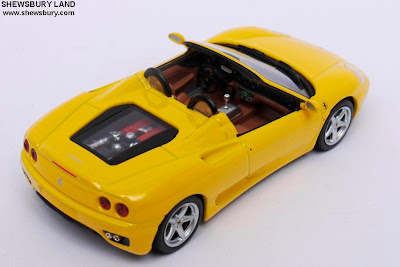 Overall, Hot Wheels did a fantastic job on the die cast car model and I think they have done a terrific job in producing this loveable "Ferrari 360 Spider" at 1/43 scale. Painting finishing is at the high level, detailing is pretty pleasing and perhaps the only wishlist I would add on this model is openable door and engine hood but then again I guess that is too much considering the decent price of this item. 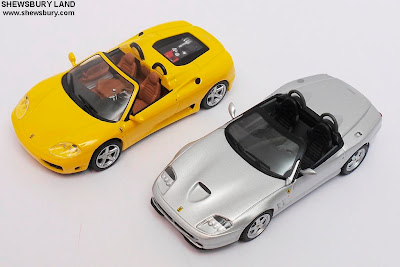 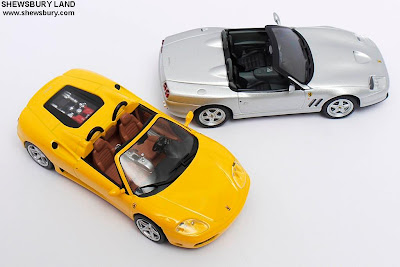 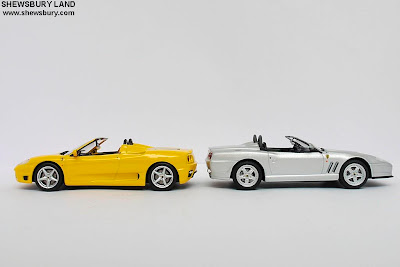