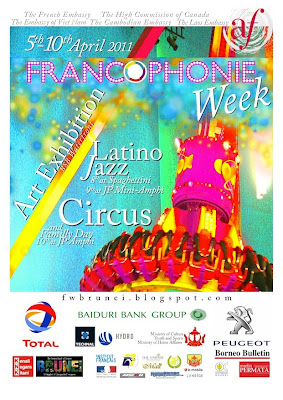 For the second year, the Alliance Française has invited the Bruneian artists Network to create in French, using the words of «tell me ten words». This year, we wish to celebrate the new welcoming space of the city centre and give the artists the opportunity to exhibit on the riverfront, close to the sculpture of the Sultan’s birthday in Bandar. For pedestrians, it will be a unique chance to see ephemeral sculptures and installations. The venue will open on the 5th at 7pm.

Jazz Dinner
Spaghettini, The Empire Hotel
A wonderful fusion feast with a high quality Jazz performance. An exclusive and exquisite moment to share.
Price: B$ 85.00
Booking: AF or Empire

Latino Jazz harmoniously played by famous French, Australian and Bruneian artists communing though to the language of music. A fun way to discover Jazz with your friends.

DOMINIQUE FILLON AND CO / FRANCE-AUSTRALIA
For the Pianist and composer Dominique Fillon, music is like travel, a way to meet different contemporary cultures. His different journeys and collaborations with artists all around the world has coloured his work. In his Asian/Australian tour, he will be joined by well known Australian musicians, Brett Hirst (drummer) and Nic Cecire (bassist), as well as local musician guest who will play along with the trio. Brunei will experience an unusual performance.

HILL ZAINI/ BRUNEI
Hill is a well known Bruneian singer and actor. In 2008, he gained popularity joining P2F, and leading the TV series Aku Bukan Milikmu . In England he signed with Sensible Records and was spotted by Mariah Carey who agreed to appear in a video. He received a 2010 AVIMA (Asia Pacific Voice Independent Music Award).


FEEZ MADEA / BRUNEI
The champion of Pilihan-Akira Talentime back in 2005, is now under Leiley’s Production House and on the frontlines of a Brunei music scene. A singer and an actress, she performed in Brunei, but also in Thailand, Vietnam on Guangxi TV and in Malysia. She won several prices including the 2010 Independent Music Awards (IMA) in KL.

The Francophonie Week will take place from 5th to 10th April. Internationally, this event aims to celebrate French language and culture, and to create dialogue between cultures areas.
In Brunei, the Alliance Française is organising a festival of cultural diversity:

- Bruneian Artists will create artworks inspired by French words
- French and Australian musicians will get together with Bruneian singers for Latino Jazz moments.
- French, Vietnamese and Lebanese food will influence a ‘fusion style’ menu,
- Families will enjoy games and be amazed by an incredible Cambodian circus....

Enjoy games and activites while discovering the various cultures of Francophonie:
races, looking for the right balance all tied up in the same rope and much more family games!

A Comedy circus with incredible acrobatics, men in the air, only saved by a hand or a wire. A new show inspired by Francophonie Week and the Bruneian traditional music. A unique collaboration for a unique family show in Brunei Darussalam!


PHARE PONLEU SELPAK / CAMBODIA
PPS is a Cambodian non-governmental organisation. It aims to support community development by providing social, educational and cultural services to children and families. PPS's action is focused on various artistic practices. Among them, circus is one of the most popular (juggling, acrobats, contortions and clowning). The most talented students formed a professional company and set up a show which has toured all around the world. This company is supported by a French association « Collectif clown d'ici et d'ailleurs » , a French association entirely dedicated to promoting shows in Europe and to enhance exchange between circus professionals. http://www.phareps.org


MINISTRY OF CULTURE YOUTH AND SPORTS / BRUNEI
The Alliance Française de Brunei events are often the way for the Traditional band of Ministry of Culture to come across foreign artists. These meetings between two musical universes will be an unexpectedly pleasant experience for both musicians and audience.


PATRICK ERARD / FRANCE - OCCITANIE
Patrick is a musician playing a French teacher. Hurdy-gurdy (in french ‘vielle’) is a traditional instrument invented during the twelfth century for backing sacred hymns and a rare instrument in our european musical landscape. Patrick carries with him rhythms and flavours of the South of France, called Occitanie.